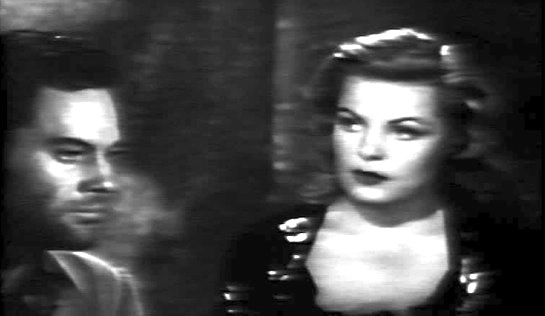 “According to the law, on your last night you can have any wish granted,” says the Warden to triple-murderer Joe Cardos (John Agar), who is within hours of his execution. Joe asks for nothing… then changes his mind and belatedly asks for some female company so that he might have a bit of ‘fun’ in his last hours. Oh, and some music, too. Now, you might think that there would be a long list of small print conditions to the Warden’s offer (e.g. *excepting guns, helicopters, a stay of execution, cocaine, any person or object for the purpose of sexual gratification, Moët, wild beasts, freedom, anybody’s head on a plate, truffles… and so on), but no, the Warden sends Police off into the night to find a woman prepared to spend a night in a Death Row cell with a convicted woman-strangler.

The cops finish up at the home of former prostitute Dora Garbin (Cleo Moore), still in her wet clothes after being pulled from the river earlier in the night after a suicide attempt, and with her thoughts of suicide just re-enlivened by an eviction ultimatum from her landlady. They offer her $200, which she drily observes might pay for a decent funeral.

“Is that the best they could do?” asks Joe of the bedraggled woman when she is led into his cell, but she is beyond caring about insults. Or being strangled, for that matter. Nonetheless, she has been assured that guards will be on hand to ensure her safety, but they extraordinarily retreat to their room, out of sight and out of hearing, to play cards. Meanwhile, the kindly Warden and his wife entertain Joe’s step-sister Clara in their home, as Joe stoutly refuses to see her.

As the time counts down, Joe and Dora trade barbs, expose their own rawness, and find some common ground. Both are outsiders. Dora can’t smile, Joe can’t cry. Joe’s aggressive bluster is shown to mask a great hurt. It turns out he was taken for a ride by a man named Paolo, for whom he did the dirty work, took beatings and took the rap four times; a man for whom he committed a robbery and accidentally shot and killed a guy, after which both Joe and his girl, Annie, kept their mouths shut and chose not to implicate the boss. But then, after Joe broke out of jail, he found Paolo and Annie “having fun together.” He duly strangled them both. Dora recognises in Joe a fellow self-loather, and sees in him a decent man. They get close.

As the appointed hour approaches, Joe tells Dora of a dream he had the night before. He was on the gallows, the trap opened… but the rope broke (upon which, custom dictates, the convict’s life must be spared) – and the prison bell was ringing. When the padre later attends the cell to hear Joe’s confession, Joe instead asks to be married. The priest baulks at first, but ultimately does as asked. That done, Joe is led to the gallows, while the new Mrs Cardos and her new, very loyal sister-in-law Clara, whom Joe has finally greeted in his final minutes, adjourn to the chapel to pray. Wait!  The prison bell rings. Has a miracle occurred and Joe been spared?  Alas, we know not.

There aren’t many films where prison visitors are left for long in dangerous situations, although both The Hour Before My Brother Dies (1986) and Proper Eyes (2007) spring to mind. Ultimately, I don’t know which is more troubling – the voyeuristic inaction of the prison officers in The Hour Before… in which the officers fail to intervene as brother and sister engage in dangerously sexualised play, or the non-judgementalism of the guards in this movie – attending ever so politely to Joe’s rude outbursts and demands (attributing them to understandable pre-gallows nerves), but managing him as one would the most benign of prisoners, leaving him unsupervised in his cage with a young woman.

Would no-one have thought, do you think, “He’s killed three people… he’s got nothing to lose if he makes it four. Maybe – just maybe – we’d better watch him.”

It is a highly theatrical, stagey film; almost a two-hander set in the one cell. Oddly, it is also set in an undisclosed country, with the strongest hint that it might be set outside the US being the guards discussing an expensive portable radio and implying that it had been imported from America. The only possible reason for locating the action somewhere else, it seems to me, is that it might seem preposterous to suggest that an American Warden would procure a prostitute to give to a woman-strangling Death Row inmate, and the filmmakers wished to distance themselves from such ludicrousness. Which is almost certainly a cue for people to tell me how naive I am and that it was common policy in the US in the 40s and 50s. Or maybe that it happens even now. 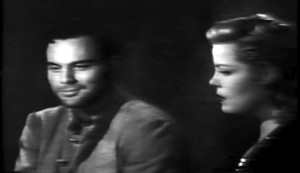 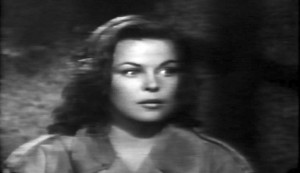