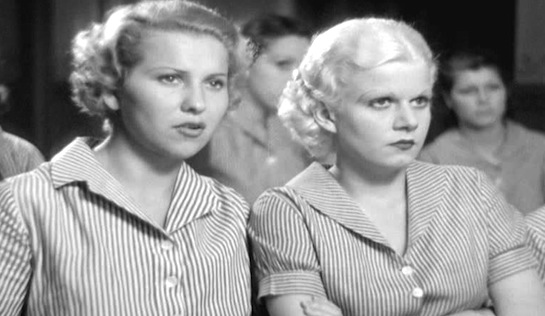 There are plenty of films about innocent women in tough prisons. This could be about a tough, not-so-innocent woman in prison (though she is pretty much innocent of the charge that landed her in there), but it’s really about the unlikely survival of a romance between two suddenly-smitten lovers.

Eddie Hall (Clark Gable) is a con man who, in trying to evade pursuing police, goes through the first open door he finds, only to find himself in the apartment of a naked Ruby Adams (Jean Harlow). By the time the police arrive Ruby has not only covered up, but she covers for him… for 50% of the money he has just scammed from the complainant.

Ruby is only 19 but is no ingénue; she is a hard-bitten blonde who has already left a long list of gentleman friends in her wake, rents a comfortable apartment without having any discernible occupation, is not above swindling her gentlemen admirers and can trade wisecracks with the best of them. Of her more persistent suitors, Al Simpson (Stuart Erwin) is a painfully decent young man who wants to take her with him from New York to Cincinnati, and another is a married man in whom Eddie and his mate Slim see mouth-watering blackmailing opportunities.

Eddie has not been out of jail for long (after an inconvenient stretch for a stolen car) when he and Slim burst in on Ruby and the married man, but he is so overcome by jealousy at seeing Ruby in the other man’s arms that he foregoes the plan to fleece him, blurts out a marriage proposal to Ruby and, in ejecting the drunken man (who has cottoned on that he was being scammed) for the second time, accidentally kills him with a single punch. He and Ruby head off to get a marriage licence unaware that the man is dead, and return home to a thronging crowd and a mass of police.

Ruby gets arrested; Eddie gets away. Ruby gets two years in prison, where she soon discovers that she’s pregnant. In her cell she also discovers Gypsy (Dorothy Burgess), who Eddie tossed aside for her, a fact that makes life a little uncomfortable for them both. “You wouldn’t be a bad lookin’ dame if it wasn’t for your face,” Ruby tells her.

But not that long after, with the assistance of the recently-released Gypsy, an on-the-run Eddie riskily ventures into the prison to visit his gal, pretending that he’s the brother of Bertha (Muriel Kirkland), another of Ruby’s cellmates. His cover is duly blown, and the police come to arrest him… but not before he latches on to the minister father of an African-American prisoner and convinces him to conduct a whirlwind marriage ceremony.  Meanwhile, all of Ruby’s friends conspire to make it happen – even springing Ruby from a cell in solitary, where she is taking the rap for her friend Sadie (a tiresomely outspoken but endearing socialist, played by Barbara Barondess) who had ripped a hymnbook in two during a church service. So married they get… to spend their wedding night in separate cells.

It’s an entertaining rom com, full of snappy dialogue, and one of six that Harlow and Gable made together. That said, the second half, which is the prison part, is less entertaining, notwithstanding the tension between Gypsy and Ruby, and Sadie’s delightful socialist polemic. The prison itself is spacious and orderly and the matrons are an intriguing mixture of stern (e.g. refusing to broach any discussion in the sewing shop about the contentious use of elastic in sailors’ outfits, despite some of the women claiming to have some familiarity with the subject) and maternal (e.g. giving the prisoners hugs when called upon to do so). In a stunning show of empathy, the warden imposes only minor punishments on the women who broke every rule to help Ruby to get married, ignoring even Sadie’s use of a homemade key to break Ruby out of solitary. Everyone, it seems, wants a happy ending.

Harlow was dead just four years later, at 26, leaving behind an enjoyable glimpse of imprisonment with hard labour. 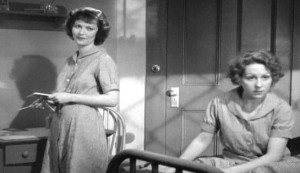 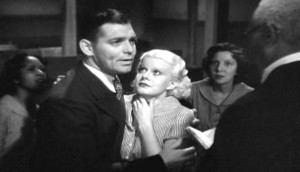 Thanks to Melian for holding this for me.