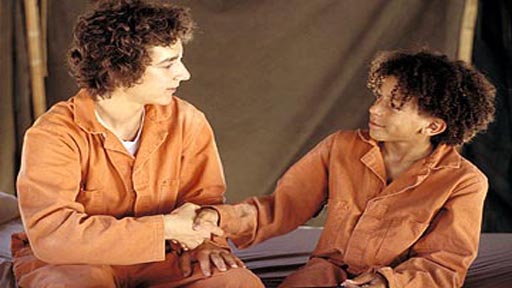 When a movie about a brutal juvenile detention camp is made by Walt Disney Pictures, you know two things: it’s not going to be too brutal, and it’s probably going to end happily.

Despite the unnerving Disney thing, Holes manages to be an engaging little comedy about a young man with a family curse and a big change of luck.

Stanley Yelnats IV (Shia LaBoeuf) is an ordinary kid walking down the street, minding his own business, when a pair of cleats worn by World Series hero Clyde ‘Sweetfeet’ Livingston fall out of the sky and hit him on the head. The Police arrive and charge him with theft. Livingston, who had donated the shoes to charity to be auctioned, drives a few nails into Stanley’s coffin at the trial: “I don’t understand what sort of person steals from homeless children.” Stanley is sunk.

Now, this is not your ordinary bad luck; Stanley’s family is plagued by a 150-year-old curse. His immigrant great grandfather made a fortune in stocks but was robbed by the outlaw ‘Kissing Kate’ Barlow (Patricia Arquette), and the family’s luck has never changed. To underscore this, Stanley’s inventor father lucklessly seeks a solution to foot odour in their very odorous house.

Anyway, the judge offers Stanley the option of jail or time at the Green Lake Camp for troubled youth. Never having been to summer camp, he opts for 18 months camp-time. He’s on the naive side. “Thanks for the ride,” he says cheerily as he gets off the prison bus.

The camp is pretty much your standard tough desert camp, except that it looks like a moonscape – surrounded by hundreds of holes. It’s run by the beautiful Warden Walker (Sigourney Weaver), helped by a marvellously villainous, nicotine-withdrawing guard, Mr Sir (Jon Voight), and a preachy counsellor (Tim Blake Nelson). The lake has long dried up and each of the boys is required to dig one large hole in the hot sun every day to ‘build character’. There’s no point in running away because it’s not possible to  survive without water for more than three days.

Stanley, of course, experiences the normal problems that beset an innocent new fish thrown in amongst bigger, tougher kids – all of whom have cool nicknames: they take his food, push him around, set him up and throw dirt in his holes – but because it’s a Disney film it never gets too nasty.

Stanley soon forms an allegiance with one other kid called Zero (Khleo Thomas) – who, despite being the smallest in the camp, is the best hole digger. Zero can’t read; Stanley can. They come to an arrangement: Stanley allows Zero to help him dig his holes, and by doing so conserves enough energy to be able to teach Zero to read.

Parallel to all this hole-digging stuff is the story of Kissing Kate Barlow and the love of her life, and it’s not long before we realise that the boys might just be digging for something; they just don’t know it.

A bit of trouble erupts when the other boys resent Stanley for getting help with his holes, and first Zero (after smashing the counsellor in the face with his shovel) and then Stanley (after stealing Mr Sir’s car and driving it into a hole) run off into the desert. No-one bothers to chase them, expecting them to become buzzard-fodder.

Of course the boys survive, with a bit of help from the recalled experience of the very first Stanley Yelnats, and all the ends tie up neatly. And happily; the good guys prosper, and the baddies are naturally shot full of… holes. 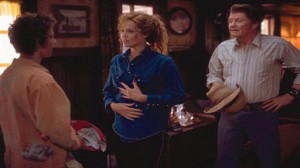 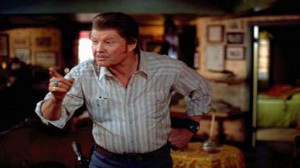