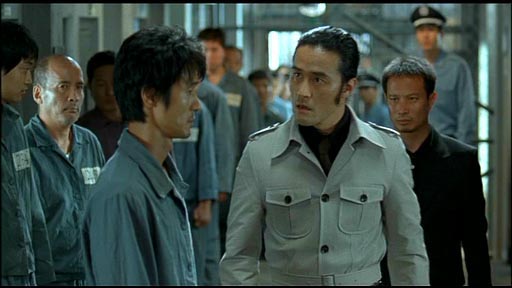 As the bound hero Ji Kang Hyuk (Lee Sung Jai) is dangled upside-down above a bucket of water and beaten, you could be forgiven for thinking that the title of this movie is an irony-laden reference to prison conditions in Korea. You don’t expect it to be the title of the Bee Gees’ song which he asks to play as he martyrs himself to the causes of equal justice for all and bringing about an end to harsh, unjust sentences.

It seems that Holiday is based on two factual events – the clearing of unsightly shanty towns in the lead-up the the 1988 Seoul Olympics in order to avoid awkward international exposure, and a dramatic prison breakout in which hostages were taken and which spread over 9-days. It’s not clear to me how those two events were linked in real life, but they’re linked here.

Ji Kang Hyuk is an honourable thief who lives in one of the squatters’ settlements. He witnesses the Government’s heavy-handed demolition of all its buildings, with a bus-load of prisoners used to violently quell a small measure of community resistance.  At the helm of the demolition party is Ahn Seok (Choi Min Soo), the gold-toothed prison Director, who summarily executes Ji Kang Hyuk’s crippled mate. When Ji Kang Hyuk lands in prison with a big sentence, he soon encounters Mr Gold Tooth and feels duty-bound to avenge his friend’s death. His attempts to even the score are thwarted and he is beaten, hung by the feet, almost drowned, threatened with a gun and urinated on. When they stop torturing him he has to contend with an attempt to stab him by the prison’s Mr Big, who has done a deal with the Director, and who conveniently gets to carry an axe handle to promote compliance with his wishes, and wears a purple uniform instead of the proletariat blue or khaki.

The failed knifing sees some arbitrary torture, this time more liberally applied across the prisoner population, which leads to Ji Kang Hyuk and Mr Big surprisingly deciding to join forces in an escape bid. They are joined by their cellmates, none of whom can see any light at the end of the tunnel because their lengthy sentences are made even weightier by the addition of administrative ‘Care and Custody’ sentences. They ingeniously escape from an escort vehicle, take Mr Gold Tooth captive (why he would be on the bus as the prisoners are transferred to another prison defies my understanding), and shoot him with his own gun. They don’t kill him, though, and he pursues the rebels with renewed vigour, even though his vigour didn’t need renewing.

The escapees take hostages (in a friendly way, because our sympathies are well and truly with them, not the authorities) but are systematically slaughtered by Goldie and his men as they break away from the main pack. Ji Kang Hyuk vows not to be killed by his antagonist. Instead, holed up in a house with some Stockholmed hostages, surrounded by snipers and with the Bee Gees providing the background music, he gets to make a lacklustre speech to the assembled media about wealth buying innocence and the poor always being guilty.

It’s a confused movie. It has a serious message about the inequity the justice system and the wrongness of the State’s capacity to impose additional crushing sentences (the ‘Care and Custody’ sentences were subsequently abolished during the making of the film in 2005), but it features an evil prison Director who represents so much of what is wrong in the world that he is no more than a caricature. Not only does Ahn Seok have a sinister golden smile, he runs the prison, personally tortures the prisoners, razes shanty towns, does corrupt deals, supervises routine prisoner transfers, personally tracks down the escapees with a bullet wound in his shoulder, calls the shots on the media… And, worse still, he does it all not from a misplaced desire to make a better world but for simple self-aggrandisement. He would not be out of place in a Batman movie, and his character ensures that the movie never rises above mediocre. 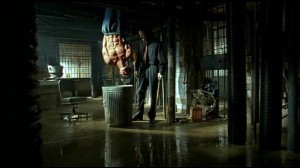 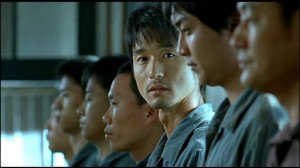 Apologies for the tricky Korean names. My subtitles had the hero as Gang-hyuk but I note that elsewhere he is alternatively referred to as Ji Kang Hyuk and Ji Kang-heon and plenty of other variations. He is played by Lee Song Jae, or Lee Sung Jae, or Sung-jae Lee (or someone else). His nemesis, the warden Ahn Seok (or Kim An-seok, as just one alternative) is played by Choi Min Soo or perhaps Min-su Choi.