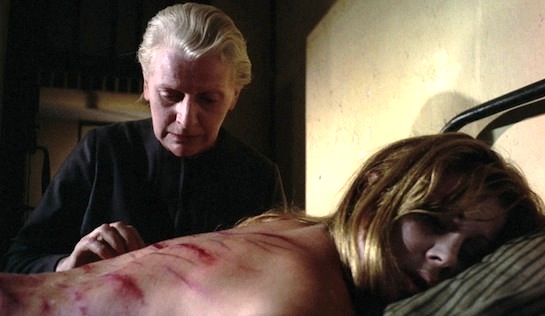 The prison in this movie is privately operated… even if it operates a wee bit outside the law. It’s a prison, director Pete Walker proffers – a touch sardonically – that is a manifestation of the fantasies of all those who loudly oppose lax moral codes and lenient sentencing and yearn for the return of corporal and capital punishment.

The story starts with a 19-year-old French model, Anne-Marie de Verney (Penny Irving), who has just been fined for baring her breasts in a park as part of a publicity stunt. She meets a mysterious man at a party who calls himself Mark E DeSade (Robert Tayman), which is strangely not enough to deter her from going on a second date with him to meet his parents.

Mark promptly deposits her at his parents’ country estate – which looks remarkably like the old county jail it once was – and leaves her there. Indeed, it is a jail – a boutique unofficial jail for dissolute girls run by Governess Margaret Wakehurst (Barbara Markham) with two of her loyal staff, Walker and Bates (Sheila Keith and Dorothy Gordon) – all of whom had years ago been dismissed from their jobs at the Crosswell Grange prison after an investigation into the suspicious death of a French girl. They are assisted by Mrs Wakehurst’s husband, former Justice Desmond Bailey (Patrick Barr), now blind and with a few short-term memory issues, who is nonetheless happy to re-sentence the girls to the serious punishments that other courts were too weak to hand out. Oh, and their dutiful son, Mark E, who lovingly procures the girls for them.

It appears that there are only ever five or so wanton women in the prison, but it’s also clear that none of them quite makes it to release. Anne-Marie soon learns that the prison operates on the three-strike rule: first strike is a couple of weeks in solitary, two strikes is a flogging, and the third strike leads to the noose. To make the killings all proper and lawful, the judge signs a fancy death warrant in each case. Nice.

For some reason Anne-Marie thinks that she doesn’t quite deserve this. She tries to escape, and fails. She is enticed to try again. When she manages to escape after having been brutally flogged by Walker, she is rescued only to be brought back to the prison, half-dead, by a passing lorry driver who mistakes the prison for a clinic. And then it becomes a race against time as Anne-Marie’s worried housemate closes in on discovering what became of her missing friend…

This is a dark, murky film (often visually a bit too dark and murky), buoyed by some fine performances: Markham’s psychotic Mrs Wakehurst, gripped by her growing belief that Anne-Marie is the dead French girl who caused her downfall decades ago, and more particularly Keith’s officer Walker, wonderfully mean and full of barely repressed sado-erotic cravings.

Much of the action is shot at the Littledean Jail in Gloucestershire. Littledean took its first prisoner in 1791 and operated as a house of correction until 1854; it provides a perfect backdrop to the action, which is pure 1970s schlock. But enjoyable schlock. 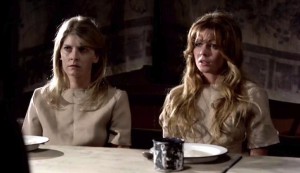 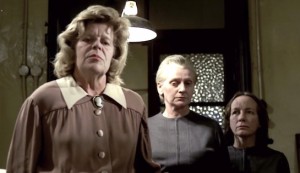 Thanks to TP for encouraging me to see this film for its dark satiric edge, rather than for the few salacious, exploitative bits which tend to dominate the film’s publicity.