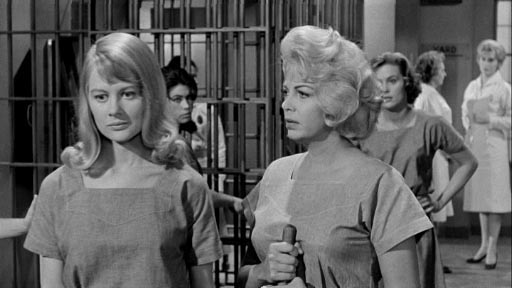 The collective wisdom seems to be that this is a remake of Caged (1949). Even my Warner Bros DVD says so, and I guess they should know, having made both movies. But maybe they didn’t watch past the first few scenes.

Sure, both feature a pregnant young woman sent to prison for being an accessory to robbery after just tagging along when their partner (a) commits the crime, and (b) gets shot dead. But that’s where the similarities end, pretty much.

In House of Women, 21-year-old Erica Hayden (Shirley Knight) is the wide-eyed newcomer to the prison system. She has a five year sentence, but is hopeful of getting out in three. If she doesn’t, she faces losing her soon-to-be-born daughter, who is able to stay with her until her third birthday, after which she will be adopted out unless reclaimed by the prisoner within 90 days. So a lot depends on her getting out soon after that third birthday.

In Caged the vicious Matron Harper rules the roost. There is no such character in House of Women, but in her place is a new mean-spirited warden, Frank Cole (Andrew Duggan), whom we later learn has a hatred of prisoners… not helped by the fact that at his last posting his wife advocated for a prisoner’s release on parole, and then ran away with him.

Not only is he new to bachelorhood, the warden is also new to women’s prisons, and he makes his priorities clear to his deputy and the alcoholic prison doctor, both of whom are a bit more concerned with the welfare of the women than he is: “The milk bill seems rather high,” Cole says. “It’s because of the babies here,” explains the doctor. “If I had my way they wouldn’t be here.” “Mind if I ask your reasons?” “Not at all, doctor. One reason is that it would cut down the milk bill.” Obviously those babies drink a lot of milk.

The authorities are able to make a small milk saving when they send Erica’s child out of the prison the day before her third birthday, without Erica being given the chance to say goodbye. It sort of wrecks the birthday party. The women riot. Erica faints and somehow, at the end of it all, finishes up as the Warden’s housemaid. For all of her youth and sweetness and perfect hair, Erica is not beyond calculatedly using her position to advantage herself, and – naturally – the Warden falls in love with her, and plans a future with her. His attitude to all the women softens as a result.

Erica goes before the Parole Board with a perfect record, but she lets it slip that she is planning to move 3,000 miles east to get a job. Warden Cole is wounded. He is no fan of parole, and even less a fan of Erica moving interstate, and scuttles her chances. The women get angry again. Cole removes as many privileges as he can think of, but in a moment of weakness allows the women who have their children with them in prison access to them on Sunday afternoons.

Meanwhile, the son of another prisoner, Sophie (Constance Ford) falls to his death from a roof – after climbing a fire escape for the second time. Maybe they should have decided to close the door to the fire escape after the first time, but what kids’ dormitory is complete without a dangerous open door giving toddlers opportunities to explore heights and practise climbing? The women’s anger boils over. With the grieving Sophie leading the charge, they take hostages, including the Chairwoman of the Parole Board, Mrs Hunter. The hitherto blameless Erica gets a gun from the warden’s house, and armed with it Sophie forces Mrs Hunter to retrace the perilous rooftop journey made by her dead Tommy. Only the intervention of the good doctor and the Director of Corrections, brought in over the top of the discredited Cole, ensure that we are spared further tragedy. With the warden exposed as a nasty rotter, Erica gains forgiveness and the world again seems a better place.

It’s not a great prison movie… but not a terrible one, either. The final riot is dramatic in the manner of most women’s prison riots, and the bad-guy warden is as unpleasant as one would expect a bitter, emotionally-stilted warden to be. It seeks to show some of the pressures on women who have children with them in prison, only for them to be removed and placed in care as they get older. One of Erica’s friends, Candy Ball (Barbara Nichols), also gives a cogent dissertation to the Parole Board on how onerous parole is and why one might sensibly decline it, but beyond that (and the flawless hair of all the women, even after they’ve just been released from the punishment cells), there is perhaps little to distinguish it from many others. Except Caged. 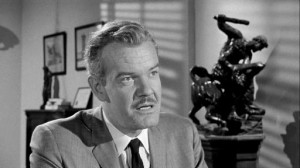 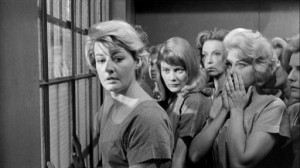