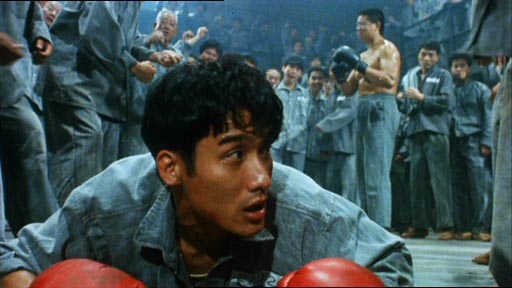 Remember when ‘Made in Taiwan’ instantly suggested an inferior copy of the real thing? Perhaps you don’t, but Island of Fire evokes that era perfectly; it is a woeful agglomeration of martial arts action drama, crime thriller, and unashamed rip-offs of other films, notably Cool Hand Luke (1967).

These days it’s publicised as a Jackie Chan movie, but it’s hardly that, either. It centres on four prisoners, the most important being Andy Wong (Tony Leung), an ex-reform school graduate turned detective, who volunteers to go into prison to find out who is behind the killing of his old Professor, who helped him on the path to righteousness.

Into the same jail goes Steve Tong (Chan), a professional pool player who refuses to throw a game and is then pursued by a triad boss’s henchmen, who stab his girlfriend. The hospital won’t save her life without an up-front payment (*Note to self: avoid getting ill in Hong Kong), so when he cleans up at a revenue-raising card game and then immediately wants to leave to pay for his girl’s operation, he is again set upon by countless bad guys, and accidentally kills one – who happens to be the brother of yet another crime boss. Naturally, Steve is a wanted man inside, but when others fail to kill him, Boss Li (Andy Lau), the dead man’s brother, gets himself put in jail to exact his revenge.

The fourth is the pitiable John Liu (Sammo Hung), who keeps escaping in order to honour promises to his young son, who has been put into boarding school (and seemingly forgotten) by his newly remarried mother.

All four ultimately get the death penalty for infractions such as shooting the head of the correctional officers (Andy) and escaping without the charisma of Paul Newman (John). All four are then sent on a final mission by the corrupt warden and other law enforcers, who use convicts who are supposed to have been executed to carry out high risk assignments (assassinations and such things) before disposing of them.

That’s one (rather silly) movie, but it keeps on lapsing into Cool Hand Luke; the chain gang’s high octane road-making scene is recreated, as is the ‘caught short’ escape from behind a bush (“Shakin’ it up here, boss”), the (non-mirrored) sunglasses, Luke’s final escape and plenty more. Even the car wash tease is given a new treatment. Then Andy’s cellmate is murdered in a scene pinched from The Longest Yard (1974), and it’s lucky the director wasn’t a fan of Midnight Express (1978) or I’m sure we would have seen a stoolie’s tongue being bitten off.

It finishes up a horrible mess of clichés, characters whose stories don’t fit easily together, and a shoot-out in which 817 law enforcement officers are shot dead by the four convicts while 394 other police ineptly fire at them without hitting their targets.

Decidedly miss-able, unless you want to catch the Cool Hand references. 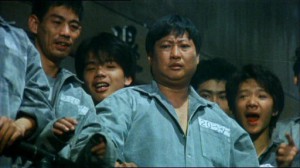 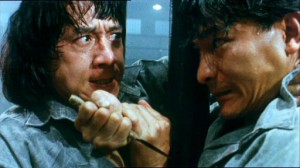