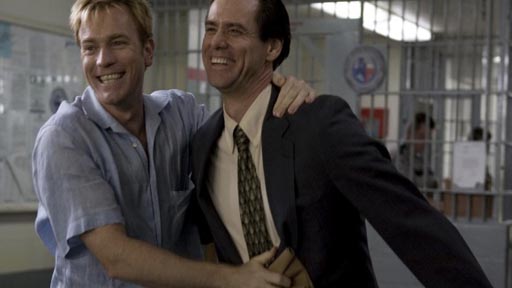 Undoubtedly, the most extraordinary thing about this movie is that it is not nearly as fanciful as it seems; it’s pretty much a true story. Much has been made of its relatively matter-of-fact treatment of what is a love story involving two gay prisoners, and of the supposed risks Jim Carrey and Ewan McGregor took by playing gay men. Well, kissing. But for a lover of prison films, the film’s standout feature is the total absence of these openly gay prisoners being stood over for sex by other prisoners, or of them being bullied or humiliated by guards. That sort of thing may happen, rarely, in real life, but never, never, you would think, in a prison movie.

Steven Russell (Carrey) is a church-going, milk-drinking police officer with a wife and daughter… until being crunched in a car accident convinces him that he can no longer live a lie. He comes out as a gay man… and starts to live many, many more lies. “Being gay is really expensive,” he notes ruefully, and to pay for his new lifestyle he engages in a bit of insurance fraud, credit card fraud… any sort of fraud, really.

Arrest and prison follow. Soon after meeting Phillip Morris (McGregor) – blonde, blue-eyed and a gentle, trusting soul who has been taken advantage of many times (and who is in jail for holding onto a hire car a bit too long) – Russell manages to engineer both a transfer to Morris’s new prison and residence in his cell. When Russell arranges for ‘The Screecher’ in the next cell to be assaulted (on account of the man’s wails disturbing Morris’s sleep), their love is cemented; Morris dreamily notes that it is the most romantic thing anyone has done for him. As guards race past to quell a noisy disturbance, they dance cheek-to-cheek in their cell to Johnny Mathis, oblivious.

When Russell gets released, he sets himself up as a lawyer – his first task being to get Morris released early, too. He promptly scams his way into a high-powered job as a CFO, and just as promptly skims thousands of dollars from the company. They live flashily… until he is undone again and again dragged away to jail.

He proves slippery. He manages to trick his way out through the prison gates three times (you’d think the Texas prison authorities might have been alert to him after the first one or two), seeking to make it up with Morris who feels used and hurt and cheated. And who finishes up back in jail himself, courtesy of a bank account in his name through which Russell channeled some dodgy money. After Russell’s next and spectacularly audacious escape scam, Russell learns that officialdom does not like to be made to look foolish four times.

This is one of the better prison comedies, although it’s a bit light-on in its prison scenes – and for a film that prides itself on its ‘straight’ portrayal of gay men in love, it skirts around the issues that confront gay men in prison. Sex in prison, it seems, is either consensual or pragmatically used as currency (unless one ventures out into the yard that Morris recklessly braves on one occasion to wave Russell goodbye). The other prisoners are remarkably tolerant of Russell, a gay ex-cop. And the authorities are equally as tolerant of his capacity to embarrass them, continuing to give him trustees’ jobs that give him licence to con them yet again.  Carrey is Carrey and competent. McGregor is exceptional. 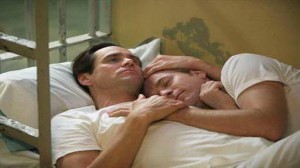