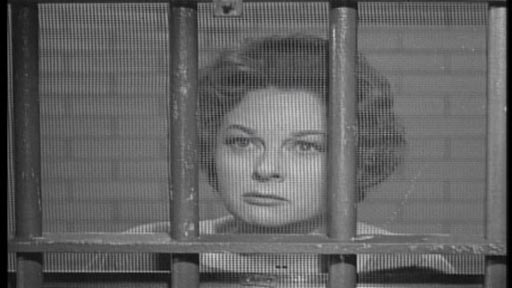 Susan Hayward won an Oscar (for Best Overacting, surely) for her portrayal of Barbara Graham in this vehicle for the anti-death-penalty campaign.

It’s based on a true story. Graham is a ‘good time girl’ with priors for forgery, prostitution and mixing with disreputables. She’s pretty and feisty. Not long after kicking out her drug addict husband, she gets charged (along with three others) with the pistol-whipping murder of an elderly woman. The film version allows the possibilities that she was or wasn’t there, and that some or all of her co-offenders put her in the frame because (a) they suspected that she led the Police to them, or (b) they thought that she, being the pretty mother of a young boy, was most likely to avoid the gas chamber even as the principal bludgeoner, which in turn would do their cases no harm at all. It’s not really a prison movie. It’s a film which asks whether it’s right to execute people – particularly where there is some doubt as to the offender’s guilt. Or where they’re good looking. Alternatively, it asks whether the media, who were fascinated by Graham being a pretty, feisty murderess and who dubbed her ‘Bloody Babs’, allowed her a fair trial.

The prison scenes aren’t overly convincing, except for the meticulous detail of the preparation for her execution in San Quentin, and the tension building as everyone awaits the possibility of a last-minute reprieve. The film may also have flittingly captured some elements of the complex relationship between prison staff and the prisoners they guard on Death Row. The weight of opinion now seems to suggest that the case against Graham was much more compelling than this fictionalised account would have you believe.

Fifty-plus years later, California still has the death penalty, and there are 15 women awaiting execution; it seems the film wasn’t wholly successful in its aim.