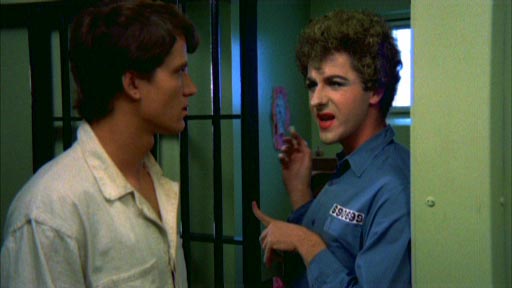 It’s forty-odd years since I’m Going to Get You… was released. Maybe it was brave and ground-breaking in its day by virtue of its depiction of homosexuality and corruption in prisons. But my guess is that it was a tawdry, poorly-made film back in the 70s… and it remains so today.

The film is also known unimaginatively as Caged Men, more obliquely as Caged Men Plus One Woman, and most often – but for reasons that are totally unclear to me (given that the credits and original movie posters all refer to ‘Elliott’) – as I’m Going to Get You… Elliot Boy. You can take your pick, it seems.

The Elliott of the title (Ross Stephanson) is something of a loser. He drives the getaway car for a bank robbery to maintain the affections of his money-hungry girlfriend Sherri (Maureen McGill), but somehow manages to fall out of the car and is then unkindly shopped to the Police by Sherri when she (and her alternative, preferred boyfriend) realise that he hasn’t got the loot. He cops two years, doing significantly better than his co-robbers, all of whom perish when they drive the Elliottless car into a river.

Elliott is a university dropout and not overly familiar with jails or jail politics. It’s not clear whether the filmmakers believe that the prison they drop him into is representative of how all prisons work, or whether they set out to show a prison with some special, unusual features – in which case Elliott can be forgiven for taking some time to negotiate his way around.

The ‘Mr Big’ of the prisoner group is (with some heavy-handed irony) a cigar-smoking, short-statured person, Kovick (Don Cook). Kovick grows marijuana in the garden – after which it is sold to others by one of the guards, Turner (Anthony Weaver), who has a sideline in raping the new prisoners. Abdullah the Butcher (a ‘wrestling great’ apparently) plays the imposing Abdullah, who struts about as though he might carry some weight around the prison, but sadly all he does is carry around some weight.

The rest of the prison’s notables are all variations on a theme: there is a small collection of drag queens, a sexual psychopath, Evans (Jeremy Hart) who likes to watch university-educated prisoners sexually humiliated, and a cross-dressing librarian (Don McQuarrie) who carefully explains to the naive, homophobic Elliott the difference between homosexuals and criminally predatory perverts (to wit, Evans).

It’s this short, earnest speech that seems to have won the film a reputation as Canada’s first gay film. Unless, of course, the (rather coy) shower scenes, the ten lashes (to the bared buttocks, not the back) handed out to Elliott’s cellmate Yurick (Edward Blessington) for assaulting one of the drag queens, and an overly-gleeful body cavity search allow it to be celebrated as a gay film (watched, one suspects, by a predominantly straight, prison-rape-fearing audience).

It’s terrible. The acting is appalling, and it constantly gets caught wanting to be brazen and titillating – only to be overcome by modesty (or censorship). It boasts an awfully grating, clanging 70s soundtrack and awfully grating 70s characters. I do, however, love the post-box red paint used throughout to signify blood; it is so thick that it remains gluggily attached to people (and car doors) even after they have been under water for hours. All this terribleness and that’s without even mentioning the conspicuous gaps in basic prison security that render most of the prison scenes implausible. To top it off, Ross Stephanson’s Elliott is so insipid and unlikable that when he ultimately wreaks vengeance on all those who have wronged him, it’s almost impossible to care.

There is some attraction in its very awfulness, but if you’re looking for a 1971 Canadian prison movie with gay themes, watch Fortune and Men’s Eyes instead. 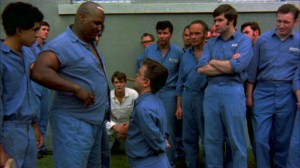 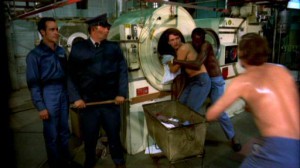 Thanks to Melian for sourcing this very B-grade Christmas treasure.