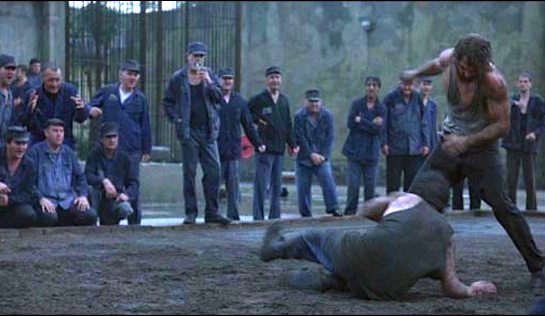 Ringo Lam (who directed the Hong Kong Prison on Fire movies) directs this as well, but if that gives you some optimism, the fact that it stars Jean-Claude Van Damme probably won’t.

JCVD plays an American, Kyle Lord, who is working in Russia. He comes home to find a man has raped and murdered his wife, but  when a court finds the perpetrator not guilty Lord shoots him dead on the spot and is himself sent to prison for life. It is quickly established that the Russians are to be portrayed in a very similar manner to the Turks in Midnight Express; they are universally incompetent, rape-condoning and corrupt, with not one having any redeeming features. Other, it must be said, than that they all speak English in this film, which is very considerate of them. Lord is taken to the Kravavi Prison, where the staff set up fights between the inmates and take delight in seeing them belt the daylights out of each other and in betting on the outcome.

Lord soon makes himself unpopular with the staff and the Russian-mafia powerbrokers in the prison by objecting to the rape of a young American kid and other injustices. The staff put him in a cell with ‘451’, a large, quiet African American who has killed his last three or four cellmates, seemingly because they spoke too much. Personally, I would have thought that the Russians might have had him executed after the first one or two, but they are uncharacteristically merciful or squeamish and leave him to kill more cellmates. 451 also does a line in Shawshankesque narration, but Morgan Freeman he ain’t. Lord starts getting into fights with others and is regularly beaten up, but while he is in The Hole he is visited by a moth which somehow reminds him of his wife and convinces him to start making himself bigger and stronger. Of course he then fights the toughest, meanest dudes in the prison and wins… until he realises that he’s lost a bit of who he really is and refuses to fight any more.

The prison hierarchy is aghast and literally string him up for what seems like weeks, by which time all the prisoners have rallied around him and support him in his ‘no fight’ protest. The guards then play their trump card – releasing a monster-prisoner from the dungeon, who touchingly recognises Lord as a fellow-traveller and refuses to kill him. Lord duly escapes and smuggles the details of all the killings and the corruption out of the prison, and the film ends with a suggestion that this led to the closure of the prison – as if the true intent of the film was not to showcase JCVD in fight mode, but to be a serious film about exposing corruption.

An awful exercise in American chauvinism from a Chinese director and Belgian actor. 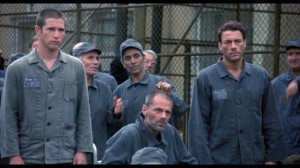 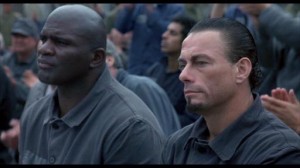