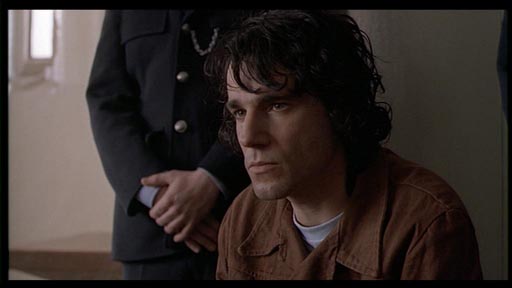 This purports to be the true story of Gerry Conlon and the Guildford Four. The Belfast-born Conlon and three others, suspected by Police of being a crack IRA death squad, were convicted of the 1974 Guildford pub bombings, and his father, aunt and other members of her family were convicted of bomb-making. They were arrested just a couple of days after the British Police won new anti-terrorist laws that allowed them to hold terrorism suspects for seven days without charge, and Conlon claimed that Police used that time to beat confessions out of him and his co-accused, with whom he lived briefly in a London squat.

Conlon’s father, Giuseppe, died in prison in 1980, nine years before his son’s conviction was declared unsafe and he was set free. The basis for overturning the convictions was not the discovery of evidence corroborating Conlon’s alibi which had been deliberately concealed by Police, as the film would have you believe, but the rather less sexy lack of alignment between the written notes and formal confession statement of another of the Four – which suggested that the Police had either fabricated the evidence or rearranged it to fit their needs. In any event, while Conlon (Daniel Day-Lewis) spends around 90 minutes of the film in prison, it’s not really a prison movie. It’s a movie about injustice, it’s a movie about a man’s reconciliation with his remote and critical father, and a movie about an aimless petty crook growing up and finally taking some responsibility for clearing his name – and that of his father. The prison scenes are very British; the familiar Pentonvillian cellblocks (of Kilmainham Gaol), restrained staff and all that. Plus a bit of IRA-led or anti-IRA violence for good measure.

It’s a moving story, with strong performances by Day-Lewis and Pete Postlethwaite as his father, but somewhat diminished by the level of artistic licence taken by the director in its retelling. I mean, if the film invites you to consider what it would be like sharing a cell with your inaccessible father for six years (with anyone for six years!) only to find that they didn’t actually share a cell, you’d have to feel a bit let down, wouldn’t you? 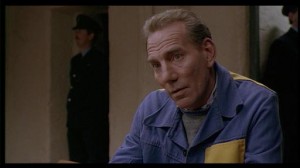 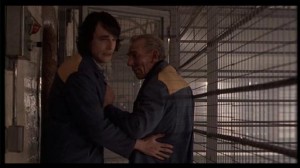