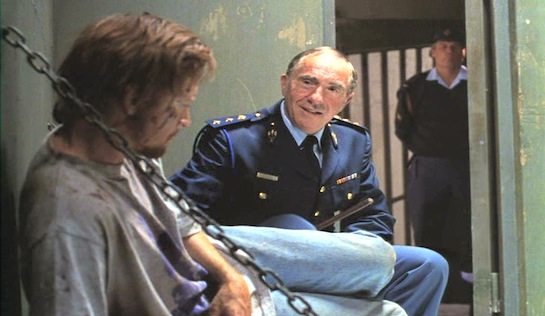 This one might not be quite as harrowing or as brutal as some others, such as Interrogation (1982), Bless You, Prison (2002) or Rosewater (2014), but is assuredly and sufficiently unpleasant. And more skilfully scripted than some others, with the mind games designed to break the interrogatee just as cruel as the unrelenting physical barbarism in others.

The film is set in South Africa in 1988, a handful of years before the abolition of apartheid, and then ten or so years later. On the inside is Peter ‘Marty’ Strydom (Eric Stolz), a 30-year-old Political Science Professor and Rhodes Scholar, arrested by the secret police under suspicion of conspiracy to commit treason, sabotage and terrorism. He is held in solitary in a prison where he is interrogated by Colonel Hendrik Kruger (a magnificent Nigel Hawthorne), who sees him as a traitor to both his family and his race, and sets out to calmly dismantle the young man’s loyalties, dignity and self-respect.

Kruger doesn’t play fair. He fabricates a letter from Marty’s girlfriend, disowning him. He fakes the front page of a newspaper reporting a terrorists’ bomb that has killed nine people, and tells Marty that he will be linked to the event and will hang for it. He tells him, falsely, that his cooperation has led to the arrest and torture of a colleague, Mzwaki, and then has Mzwaki beaten in front of him. He arranges for a ‘prisoner’ in the opposite cell to elicit a confession from him to hiding arms. He repeatedly prevents Marty’s father from seeing his son and then tells Marty that his father wants nothing to do with him. And so on.

Marty unravels as the physical torture is stepped up… as is the certainty with which he believes that he has betrayed others and that those whom he loved and trusted have deserted him.

Interspersed with this action are scenes of Kruger, now retired, being interrogated by an investigator for the Truth Commission (Louis Gossett Jr), who years earlier was held in the same cellblock as Marty. Kruger is held to account for the lies, the tactics, the brutality. But there are a number of parallels in the manner in which Kruger is treated and the way that he treated Marty; while the interrogation satisfies a primal desire for revenge, there are some grounds to believe that perhaps all that has happened is that the roles have been reversed – that abuses of power remain but the power is in different hands.

While it is a stagy, theatrical production, the momentum is maintained by excellent performances from Hawthorne and, to a lesser extent, Gossett Jr, and an intelligent script. But other than stark, bare cells, and almost the entire film taking place in one, not much prison.