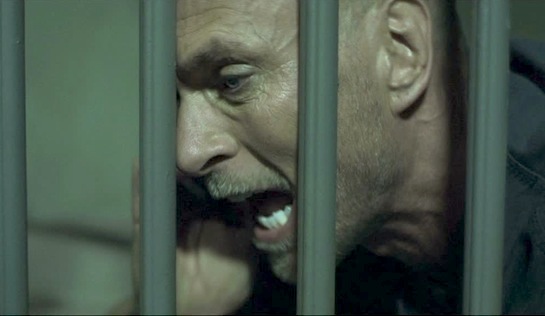 Hitherto all-round good guy Barry Lloyd steps out one day in Texas in 2003 and massacres 19 people in a grocery store for no reason. Or rather, 19 people die; some appear to have committed suicide. Lloyd is awarded the moniker ‘Barry the Butcher’ and a death sentence.

A few hours ahead of him being executed by lethal injection, many years later, his just-vacated cell is filled by Miles Berret (Luke Goss). Miles is serving 18 months for possession and it’s his first day in the jail. We know immediately that this prison, the Clark Correctional Facility, is no ordinary prison; if it’s not unusual enough to have prisoners awaiting imminent execution living in cells alongside short-termers, it’s even less usual, I suspect, to fill a condemned man’s cell before he’s dead.

In the cell next to Miles is the world-weary Anthony (Paul Rae), who has served 18 years and still has many to go. They are woken in the middle of the night by screams and gunshots and the strange vortical sound of something pulling a human apart. Welcome back from the dead, Barry the Butcher.

Anthony confirms that the sound of someone being pulled apart is not usual for the Clark Correctional Facility. Miles is clearly of a nervous disposition because this seems to unsettle him. When a guard who is missing his hands staggers in and dies directly outside Miles’s cell, the slightly panicked Miles is able to grab his mobile phone and ring 911. The operators think he’s playing a prank. He rings his wife. She thinks he’s ingested something. He looks to Anthony for help. Anthony tells him that Barry used to have conversations with an audible voice in his cell, and that he used to repeat just one name over and over: “Miles”. Big help.

Miles finds more clues to suggest that somehow Barry foresaw his arrival. That doesn’t help, either. Guards and prisoners, meanwhile, are stickily slaughtered or line up to extravagantly sacrifice themselves. Miles and Anthony fortunately manage to let themselves out of their cells and join with a third prisoner, Russell (Isaac Singleton Jr), to seek a way out before the unseen (but very impressively sound-effected) Butcher hunts them down.

There are several nice things (or relatively nice things) that one can say about Inside. The acting is better and the blood darker and thicker than in most films of this genre. And the night is murkier, too. Fine murkiness levels. The horror, generally speaking, is of the foreboding type, rather than the sudden, jump-out-at-you type, which may also be good if you startle easily or are doing something delicate, like cake decorating or eye surgery, while watching the DVD. I nonetheless remain a little bewildered at why people make films such as these, unless it’s to give work to an unemployed vortex.