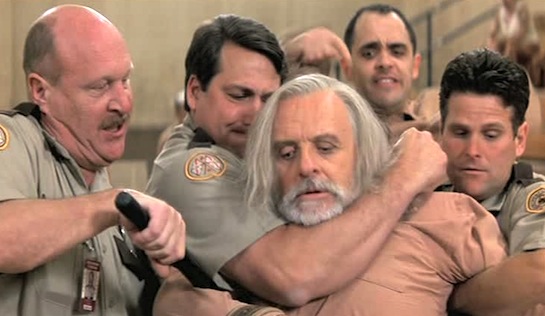 It’s easy to see how this came to be conceived, with its echoes of The Silence of the Lambs (1991), One Flew Over the Cuckoo’s Nest (1975), and Gorillas in the Mist (1988). And it’s easy to see why it never quite reaches the heights of those movies (or at least the first two).

Sir Anthony Hopkins, while not quite in Hannibal Lecter mode, again plays a difficult, highly intelligent, games-playing murderer. His anthropologist and primatologist Dr Ethan Powell has been brought back to the US from the Rwandan jungle, where he had been imprisoned for a year for killing two park rangers, clubbing them to death, and injuring three others. It is known that he had been missing for a couple of years, living exclusively with a band of mountain gorillas. He is still quite feral, given to spontaneous bursts of violence, and hasn’t spoken a word since his arrest.

Dr Theo Caulder (Cuba Gooding Jr) is a bright young psychiatrist desperate to do the initial 30-day court assessment on Dr Powell, knowing that even coaxing him to talk will bring him some renown. His supervisor, Dr Ben Hillard (Donald Sutherland), ultimately agrees… but also commits Caulder to going on the staff of the Harmony Bay Correctional Facility, where Powell is being detained, so that he has to work with a motley array of criminally insane prisoners, rather than devote all his time and energy to the man who could well bring him fame and prestige.

Harmony Bay’s psychiatric ward is overcrowded and under-resourced. The over-medicated inmates spend all day in a gym; only one of them is allowed out in a small yard in the open air, and that one is decided by staff, who hand out playing cards (with the one holding the Ace of Diamonds winning access to the yard), and the bullies who stand over the weaker prisoners for the Ace. The ward regime’s flag-bearer is guard Dacks (John Ashton), who exercises control over the inmates by intimidation and violence; his approach fully endorsed by the hard-bitten Warden Keefer (John Aylward).

Caulder, of course, soon brings Powell out of his shell… but Powell is not about to let that be entirely on Caulder’s terms. In Caulder, Powell sees something of himself when he was a much younger man, and he is equally as keen to educate the brash, driven psychiatrist as Caulder is to lead the older man out of the wilderness. The two men have different ideas about who should lead who on the voyage, but ultimately Powell’s world view is sufficiently seductive to convert Caulder to his radical way of thinking. Well, not quite, but Caulder loses some of his professional objectivity and begins to want to help Powell as a friend.

The film is melodramatic and message-laden… neither of which, I hasten to add, is necessarily bad. But in search of drama and poignancy it gives us a very confused, uneven portrayal of a big, old prison; it starts with Caulder not being allowed to slide a piece of paper across a desk to a chained Powell (that’s a guard’s job, apparently, on safety grounds), but within just a few days the guards seem to have no qualms about Powell being taken out of the prison to visit the gorilla enclosure at the zoo (a little extraordinary on its own), and leaving him – unshackled – with Caulder, the apes and no other supervision. Powell has fiercely attacked both guards and a prisoner while in restraints, but when he is reconciled with his daughter, Lynn (Maura Tierney), he is handcuffed but (just a touch surprisingly) is allowed to hand her an envelope he has in his possession and there are no supervising staff in the vicinity at all. No, not one.

Despite the apparent gravity of its subject matter (including its floating of the notion that humans’ dominion over the rest of the natural world needs to be questioned, and its call for the more humane treatment of the criminally insane), Instinct is unlikely to leave a lasting impression; its themes almost appear to be selected for their entertainment value and the ease with which they can be discarded after use. It has a strong cast but neither Hopkins nor Gooding can turn it into a memorable prison movie. 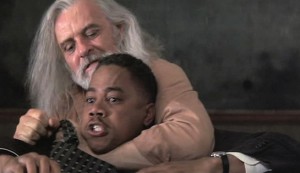 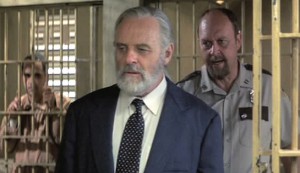