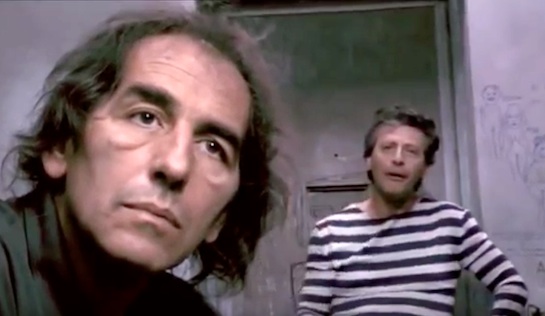 Prison comedy is tough. And it’s even tougher when it takes 1 hour 5 minutes before the first of the two main protagonists lands in jail. That’s a lot of scene setting.

The title translates as ‘lifers’, of which Panos (Vangelis Mourikis) is the first. Panos is a bit of a lad; a middle-aged man living a carefree life. He drives a truck, enjoys his ‘perks’ along the way (the odd sexual conquest), and is constantly on the move – not tied down by family obligations or lovers. He has an inordinate hatred of being checked up on by his boss, Barberis (Stefanos Riskas), and is relentlessly pursued by the intense, slightly mad Melpo (Katerina Daskalaki), whose aim, it seems, is to hook up with him so that each time she can storm out in a huff.

The other lifer is Lohagos (or ‘Captain’, Takis Spiridakis), who writes for and publishes a depressing little newspaper which exposes all of society’s ills and airs everyone’s dirty laundry. It makes no money, and when the bank (seemingly at the discretion of a banker who had been attacked in the paper) forecloses on his house, Captain takes him hostage and is carted off to prison. He gets 12 months jail, suspended, and is outraged. He has nowhere to live and, despite a huge crush on a nightclub singer, Stella (Evaggelia Moumouri), has such a pejorative view of the world he sees no point in freedom; he is happy to be detained in prison. He is a ‘volunteer lifer.’

In that respect he is very jealous of Panos, who is falsely accused of the murder of his boss, Barberis, and the wounding of Melpo (found in each other’s company), and is very quickly (before Melpo recovers sufficiently to identify her attacker) found guilty, sentenced to two consecutive life sentences and had the conviction and sentence confirmed on appeal.

The two men share a cell together in a boutique prison under renovation, where they seem the only prisoners looked after by just three accommodating staff. They don’t always see eye-to-eye; Panos is as desperate to be free as Captain is to stay.

The comedy is, on the whole, lame. But I liked two things, both late in the piece. One: a scene in which Panos, who has escaped, has been recaptured and is wrestled back into custody, the group briefly tangling with another group which is forcibly removing a resisting Captain from the prison on the completion of his sentence. The second: Captain duping Panos into removing a noose from around his neck by insisting that if he kills himself he will replace the handwritten suicide note pinned to his chest (one which protests his innocence and claims his right to enjoy freedom) with one that cites the reason for his suicide as his inability to come to terms with his discovery that he is gay (and is signed “Kisses, your slutty Panoula”).

Both struggle: Captain to be convinced that there is any point to freedom, and Panos to articulate what it is that he cherishes about the freedom that has wrongly been taken from him. The film itself is not so much of a struggle as a little corny and quite a bit too long. 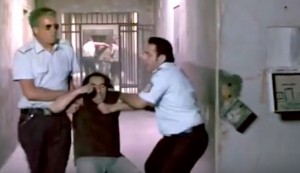 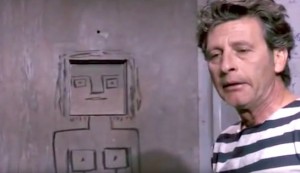