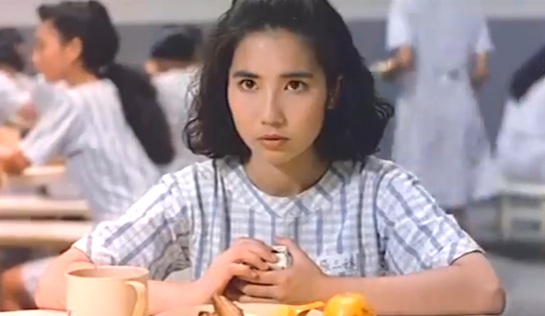 Forget the title; this is not your ordinary Women in Prison exploitation movie. Well, yes, there is some adolescent preoccupation with sex (principally as a spectator sport), and a collection of minor players whose sole function is to wear little underwear and have their prison uniforms ripped in fights, but it is more comic ghost story than soft-porn. And it’s the ghosts that make it a little unusual.

Indeed, the film is also known as Haunted Jail House, which probably better reflects its storyline.

There are two ghosts. One is that of a harsh female prison officer (Jane Ha) who dies unluckily during a quick sexual escapade in a sacred area when a statue of the War God is disturbed and falls on her head; her angry, vengeful ghost is predictably intent on creating terror and mayhem. The other is a much more benign ghost of a young prisoner, Jane (Loletta Lee), who died while trying to escape fifteen years earlier.

It’s not all supernatural though; the film also features some standard prison scenarios. There are two factions, one led by the well-endowed Chesty (Amy Yip), the other by a boyish prisoner (Chan Git Leng). The two groups find much to fight about – in the dormitory, the mess room, the showers, even on their way to work. And there is a big-hearted prisoner, wonderfully named in my translation as ‘Everyone’s Big Sister’ (Maria Cordero), who keeps finding herself in the punishment cells (again, the ‘rice water building’ in my version, which I guess may be the equivalent of bread-and-water) without doing anything to deserve it.

But the major plot-line involves Blackie (Joanna Chan), who is as intent on escaping as Jane was all those years before. And because Jane is a good ghost, she is not averse to assisting Blackie achieve her goal. Blackie’s actual attempts to escape unfortunately never match (for ingenuity) one of her dream-sequence escapes in which she uses a rope made of toilet paper.

Finally, for dubious comic relief, there are three inept and randy young tradesmen brought in by the Warden to renovate an old building adjacent to the cell block. The three buffoons spend more time spying on the prisoners (almost all of whom are young and pretty), or chatting them up, or setting up the Warden with a virginal taoist mortician, Pei (Pauline Wong), or posing as exorcists themselves, than fixing the building. It is their fake taoist priest incantations which release the vengeful ghost and create havoc in the prison.

While this may be a curious mixture of horror, exploitation and comedy, it at least provides some clear lessons for the Hong Kong Prison Service: employ professional exorcists and tradesmen, invest in underwear and non-rippable uniforms, and monitor the strength of the toilet paper, just in case.