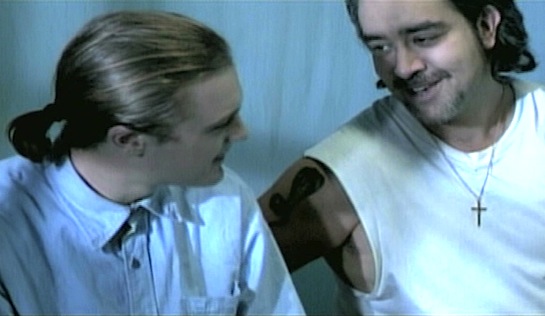 From the very first scenes, where Randy (Michael Pitt) is silently preparing to go to court, you know things aren’t going to go well for him. His tie is all awry in a schoolboyish sort of way, he’s pasty, he has a constant pouty look, and his hair is tied back in a vain little ponytail.

It turns out that he’s adolescently and petulantly spraypainted a neighbour’s Merc and, with a couple of drug-related priors, has copped 25 years under the three-strikes rule. Oh dear. He gets put in a cell with Jake (Stephen Adly Guirgis), a lifer who slit his wife’s throat after she had an affair 3 months after their wedding. Jake’s very comfortable; he is safe in his certain knowledge that he had to kill her, doesn’t regret doing so, and accepts that this means he must be locked up for life. Simple. Jake is engaging, humorous – but full of subtle (and sometimes not-so-subtle) menace.

As expected, the sharing a cell bit doesn’t go well for Randy. He is quickly dominated and is soon prevailed upon to provide sexual favours. There is no way out. Despite Jake assuring him that a 25 year sentence is actually good because he will get out at some point, it’s a bit hard for Randy to see this in Week 1. The camera only leaves the cell very briefly; we are meant to understand that Randy is clearly trapped there, and there is (most improbably) little or no noise from other inmates to suggest that there is any sort of world outside the cell. No help, no respite, no hope.

Jake is classic psychopath; charming, vicious and remorseless. He imposes his view on Randy (not uncommon in prisons, of course) that you can engage in homosexual acts without being gay, and illustrates this with an assertion that no man would refuse to sodomise George W Bush, simply for the bragging rights. Jake is undoubtedly a monster in what one presumes is a jail full of monsters, but in many ways he is drawn more sympathetically than Randy, who (despite being doubly victimised by the State’s three-strikes laws and then by Jake) is wet and has the demeanour of a spoiled brat. Only once, when he attempts to engage Jake in a bit of psychological warfare of his own, does one start to really side with him… but Jake quickly puts him back in his box.

This is a very theatrical film, full of portentous and uncomfortable silences, and a direction which emphasises the claustrophobic nature of their confinement. At times it’s awfully harrowing and hard to watch, but is sustained by fine performances all round and a script that nicely captures the power games and the helplessness of the two main characters. And as a swipe at the 3 strikes legislation, it’s not bad either.