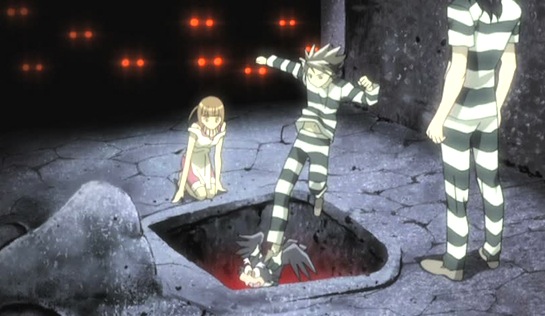 I’m still trying to work out myself whether this qualifies as a movie. It’s a three-part original video animation (OVA), apparently, following on from the TV series based on Yuichi Kumakuru’s manga.

I wasn’t familiar with Jing’s work, but I now know that he’s a child master-thief who, in each of the TV episodes, steals something valuable and simultaneously protects a beautiful girl from a nasty villain, while his stunted albatross sidekick, Kir, falls in lustful, unrequited love with her. Kir also has the ability, when he latches onto Jing’s right arm, to spew out torrents of green energy, which would seem to be helpful rather than being a messy liability. Jing is wise and serene, while Kir is all talk and nervous energy.

Jing (in the 2007 English language version, voiced by Joey Hood), gets himself locked up in the supermax Seventh Heaven prison in order to steal a special dream orb. A prisoner-magician there, Campari (Robert Kraft), came from a village called Acacia, you see, but the village was destroyed by some bearded men and now Campari takes others’ dreams, distils them into these orbs and feeds off them, because he is unable to dream himself.

Jing and Kir (Ron Berry) escape from some tricky situations in the jail, but find themselves trapped for a while in Campari’s dreams, from which some prisoners never find their way out and die of starvation. Luckily, Jing is able to find his way out and at the same time reunite Campari with his childhood Acacian sweetheart, but not before we’ve had a flashback into his own younger days – a couple of years ago when he was ten and Kir was still an egg.

Some of it is quite good fun, with an entertaining array of monsters, some humorous and some ghastly. There is also a nice nod or two to classic prison movie scenes. But many of the dream sequences can be a bit of a drag, and the OVA ends with a piece of sententious nonsense that contains the wonderful line, “The raspberry jam you made yesterday will never betray you…”. I do hope that it is tongue-in-cheek, but I’m not so sure. 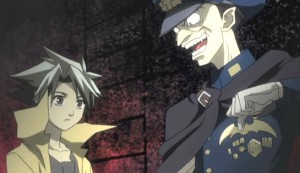 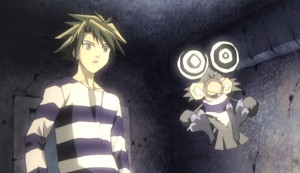