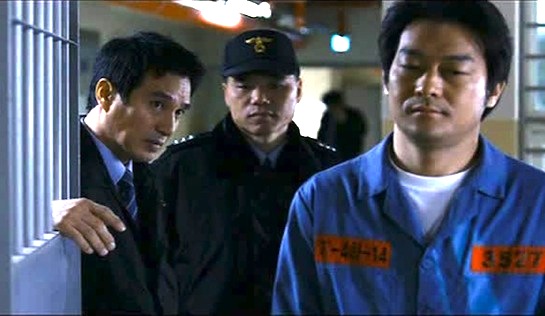 The Executioner is one of those rare prison officer-centred films, as opposed to prisoner-centred. It traces the fledgling career of Oh Jae Gyeong (Yun Gye Sang), a raw, immature young officer whom we follow through trials both at his work and in his personal life.

Oh’s journey is set against a backdrop of a prison system which is about to recommence executing prisoners after a spell of 12 years – the catalyst for which is the conviction of psychopathic serial killer Chang Yong Du (Jo Seong Ha), who abducted and murdered 12 women in a 7-month spree; the government clearly needs to be seen to be responsive to the public outcry and needs to be seen to be tough on crime.

Working alongside Oh is the hard-bitten Bae Jong Ho (Jo Jae Geon); tough, intolerant of fools and not kindly disposed towards prisoners, whom he is inclined to counsel with his baton. Disdainful of Oh at first, he later inducts him into the job, teaching him how not to show weakness, how to manage conflict with prisoners… and how to brutalise.

On the more forgiving side is Kim Gyo Wi (Park In Hwan), an officer for 30 years who has formed a very close 20-year bond with elderly prisoner Lee Seong Hwan (‘Shrimp Eyes’), who killed three people in a burglary-gone-wrong. When the State decides to start executing people again, Shrimp Eyes is one of those on the list. Notwithstanding the horror of his crimes, we are encouraged to view him sympathetically – he is decent, seemingly reformed and God-fearing; when a prisoner takes Oh hostage and holds a knife to his throat, he alone steps forward and saves Oh by helping disarm the inmate. Bae’s response is typically cynical: “It won’t change your status,” he tells the bleeding old man, as though no such act of gallantry could ever be without an ulterior motive.

As the Christmas Eve hanging date approaches, there are precious few volunteers to be part of the execution detail, and tensions amongst the staff mount as most find pressing reasons for themselves to be excused. Ultimately, Bae (predictably) puts up his hand, and Oh is conscripted by ballot. The experienced Kim, who has performed the duty many times in the past, struggles with the prospect of having to assist in the killing of Shrimp Eyes, his good friend.

Oh discloses little of these troubles to his girlfriend, Eun Ju (Cha Su Yeon), who is going through her own moral dilemma; she has discovered that she is pregnant and the pair wrestle with whether to keep it the child or not. And, quite aside from that, Eun Ju battles with the changes she sees in Oh.

Christmas Eve arrives. Ultimately Kim agrees to take part in his friend’s execution; he calms him, reassures him, and is there for him at the very end. The execution of Chang, however, goes horribly wrong. First he baits the guards: “It’s fun, isn’t it? Watching people die?” he laughs. “Guess I can’t kill any more, but you will!”  As they try to hasten the execution the trap doesn’t open and the impersonal, state-sanctioned killing becomes a little less clinical as guards have to get more personally involved to ensure that the sentence is carried out.

It’s a shame that at times the film’s parallels between each of the different forms of life taking (murder, execution, abortion) are a bit laboured, as if we might miss the connections altogether if they are too subtle. I guess we should be thankful that Shrimp Eyes is not a few years older and made out to have a proud history of killing for his country as a veteran of the Korean War.

But the film is more than an exploration of whether the death penalty is morally right. Mind you, it does include a wonderfully farcical scene of prison staff desperately trying to keep Chang alive (after he has cut his throat) so that he might be fit enough to execute. The film also has useful things to say about abuses of power and the hardening of attitudes that seem to be part and parcel of the prison officer’s job, but at the same time it provides an extraordinary counterpoint in the tender relationship between Officer Kim and the prisoner Seong Hwan. And in contrast to so many movie depictions of prison guards itching to inflict pain on prisoners, it is novel to see the guards frantically trying to find reasons to avoid being part of the hanging party.

The Executioner provides a fresh, surprising, balanced, very human picture of prison, and is by far the best Korean prison movie I’ve seen. [At least it was, until I saw Harmony (2010), which tries to influence public opinion against ending the 12-year moratorium on executing prisoners, which the Korean government had indicted it was again considering, in an almost identical manner.] 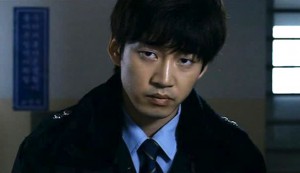 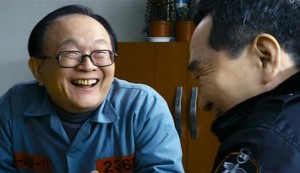 One Response to “Jiphaengja / The Executioner (2009, South Korea)”