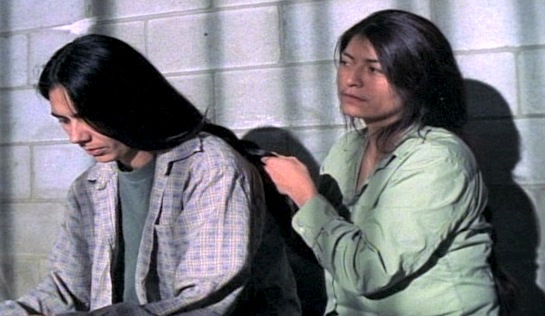 This is a film that promises a great deal, and delivers much less. Worse still, it only takes just a few seconds of the opening scene’s awful acting and poor direction to dash any hopes you may have had for it. From time to time it begins to drag itself out of its meandering pointlessness, only to collapse again under the weight of cheap sets and a banal storyline, as if being about an Aboriginal couple in prison and a troubled Aboriginal man is enough. Not all movies need sheer triumph or tragedy to work, but it helps if you care what happens to the characters.

Johnny (Gail Maurice) is nearing the end of a 7-year stretch inside Kingston’s (now closed) Prison for Women. Hers has not been an easy life. A Native Canadian, she shot and killed her father to stop his physical abuse of her brother, Clay. But that was years ago when she was a child, and more recently she has found herself inside after she “stabbed a man ’cause he pissed me off” in Vancouver. She’s not overly remorseful, it must be said. “I’ve done my time, ” she says, indignantly, when asked what she’d do now if someone pissed her off.

Johnny has had a troubled relationship with her mother (Gloria May Eshkibok), seemingly because of her mother’s failure to stop her husband’s abuse, but has forgiven her. Clay, on the other hand, remains estranged from his mother. He left the reserve long ago to be a rock star but has been more successful at trafficking drugs and other criminal pursuits. Johnny carries the extra burden of trying to reconcile her brother and her mother from jail.

Then along comes Lana (Columpa Bobb), a new prisoner. She is also a First Nations woman; and alternately sweet and tough. She and Johnny fall in love. And that’s it, in a sense. We learn virtually nothing more about them through their relationship. That is, until Lana uses an unpleasant term to describe a male correctional officer and then is nastily backed into a corner by a group of officers out to exact some formulaic revenge; she pre-emptively whacks the same officer and gets beaten badly for her troubles. On coming out of her punishment cell, she confronts Johnny with her new-found knowledge that Johnny is soon to be released, and hadn’t told her. That she has let her down, and will abandon her.

Johnny does get released, but before she does, there is more pain, more misery. And we get to see some joy, as well. But the characters have been so poorly drawn, that these events don’t have the emotional impact that they should. It’s a shame. 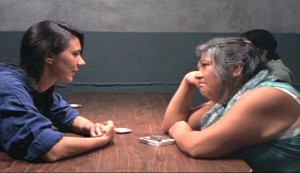 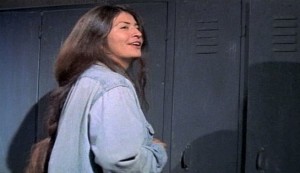