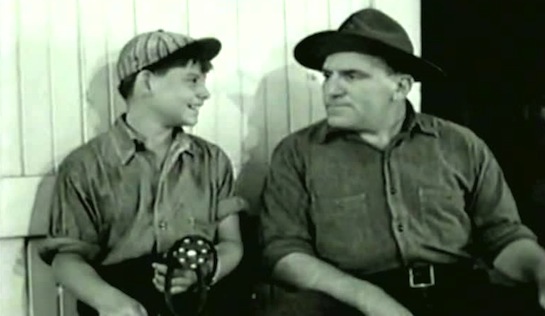 When you learn that almost all of this film was shot at the Boys’ School of Indiana in Plainfield, and then see the Governor of Indiana, Henry F Schricker, making a guest appearance, playing himself, you know that this is going to be reasonably sympathetic to the reformatory and its correctional approach. Indeed, this is unashamedly a tribute movie – co-written by producer RW Alcorn, himself a grateful graduate of the Boys’ School who went on to make lots of money. And this film.

The movie is also known by the less imaginative title of Boys’ Prison, and it features many of the Plainfield staff and boys as extras… amongst them, possibly, Charles Manson who would have been there at the time it was filmed, but who escaped in 1951 and later claimed that he was sexually abused there.

Its focus is instead on Johnny Holiday (Allen Martin Jr), a tough little fatherless kid of 12 or 13 who steals for his much older friend, Eddie Duggan (Stanley Clements), whom he idolises. When Johnny is caught with the proceeds of his latest break-in, he staunchly refuses to give Eddie’s name to Police and is sent off to the Boys’ School. On Day 1 he tries to escape, and immediately tangles with the gruff ol’ farm manager, Sgt Walker (William Bendix). Johnny is small in stature, but makes up for it in attitude.

Walker has a heart of gold and recognises that Johnny has some natural talent. Despite some early hiccups, he makes it his mission to turn the boy’s life around. When Johnny overhears Walker pressing his boss to get him back on the farm after an earlier sacking (“He’s got a natural-born way with horses. Why, there ain’t a boy on the farm, big or little, that can touch Johnny Holiday”), he latches on to his new idol and will do anything to please him.

That is, until Eddie arrives at the prison. Johnny’s loyalties are torn. He wants to do the right thing by Sgt Walker, but finds it almost impossible to resist Eddie’s attempts to lure him back to his old rebellious ways. Walker keeps Johnny firmly under his wing by taking him out to visit his ill mother in hospital; Eddie undermines it by pressuring Johnny to bring him back some cigarettes. Walker and Johnny play a game of mumblety-peg; Eddie undermines it by trying to kill Walker by dropping giant hay tongs in his direction. They miss. Well, Johnny pushes Walker out of the way so they miss. This episode prompts a detailed diagnosis of Eddie by the prison psychologist – just in case our sense of Eddie as a nasty psychopath needed confirmation and validation.

But then things turn sour between Johnny and Sgt Walker. Nellie, the mare that Johnny has been lovingly looking after, is about to foal, but the foal turns and Walker is told by the local veterinarian that he must kill the mare to save the foal. He reluctantly shoots her. Johnny is distraught, feels horribly betrayed, rejects the foal, and reverts to the sort of boy who can’t find it within him to say “Yes, sir” in every sentence. Eddie seizes upon the rift to strengthen his own position with Johnny.

When Indiana’s own Hoagy Carmichael comes on to sing at the Boys’ School’s Christmas concert, Eddie grabs Johnny to make an escape – not necessarily because of Hoagy Carmichael, although that may have been understandable. Eddie tries to steal Walker’s car and grabs Walker’s gun out of a locked drawer… but then Walker arrives. With Walker held at gunpoint, Johnny makes a surreptitious phone call to summon help, and pleads for Walker’s life. When the cavalry arrives, the cornered Eddie shoots Walker to add a bit of spice to their rivalry.

But, lo and behold, Walker survives, Johnny comes to love Nellie’s foal, Mrs Holiday recovers, Walker is fatherly-proud of Johnny as he is set to leave the Boys’ School, and the future looks rosy. As Johnny heads homewards as a civil little gentleman in a suit, another rebellious young kid challenges Walker and the whole organic redemption process is set in motion again.

I rather liked this film. It is full of gentle, sentimental humour typified by Walker’s ingenuous attempts at appearing not to care about the boys in his charge. And there is the unintentional humour (and some unexpected homo-eroticism) as Johnny massages Eddie’s foot with both dressed only in towels. 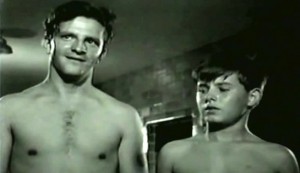 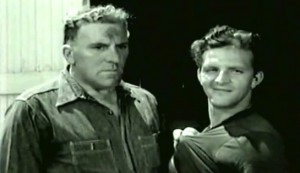