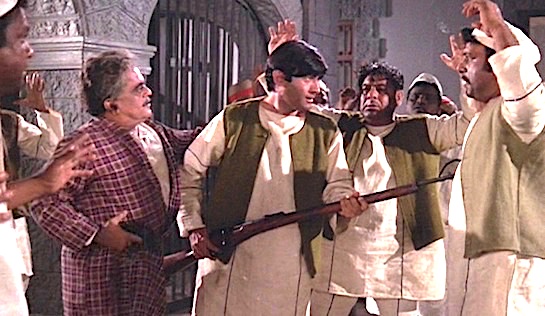 Many of the synopses of this film suggest that it is about a poetry-loving jailor’s daughter who falls in love with a prisoner. It’s not. Shalini (Hema Malini) has a classmate whose father is the Jailor of Delhi’s Central Jail, and she spends a holiday with her friend, living inside the jail. The Jailor (Manmohan Krishan) allows her to roam freely around the jail, and in the quarry where the prisoners work, unaccompanied… and it’s there that she meets Amar Kumar (Dev Anand), an electrical engineer with a taste for poetry. And falls for him.

Amar has been convicted of murdering the brother of his girlfriend, Sapna. He had intervened to stop him sexually assaulting another young woman; the would-be rapist then produced a knife but after a dour struggle it was he who was dead. Sapna’s family paid the would-be victim to falsely testify that it was Amar who was her assailant and who carried the knife. Amar wears his false conviction fatalistically.

One evening, when you would hope that all the prisoners are securely locked away, they somehow manage to start a riot in the jail’s forecourt. With Shalini and her classmate (in their sleepwear) watching from their balcony, Amar seizes a long-arm rifle, saves the Jailor’s life and restores order, much to the chagrin of the rioters.

The government, on the other hand, is very grateful and waives the two years remaining on his sentence; he is set free minutes after Shalini’s holiday ends and she heads back to university.

Amar returns home to find that his mother has had to sell their home (his father, who had died suddenly, had left them in massive debt), and that she is reduced to sewing clothes, while his brother has foregone school and is a shoe-shine boy and his sister is a risqué cabaret performer.

He is approached by a spiv he knew in prison, Madanlal Dogra (Madan Puri), and offered a job he’d been offered as the manager of an estate. Almost immediately, Madanlal is set upon and killed by his enemies…. but Amar takes the letter of introduction, and the job, posing as Madanlal.

What he has misunderstood is that the job is really to kill the wealthy wheelchair-bound owner of the estate, Thakur Rajpal Singh (Pran), the contract having been let by Thakur saab’s much younger second wife, Rani (Bindu). There is much hilarity as Rani as Amar talk at cross-purposes about when he will finish the job.

Then Thakur’s daughter from his first marriage arrives for a visit… and OMG it’s Shalini! Soon afterwards, a wealthy married couple arrive to negotiate with Thakur about an arranged marriage between the husband’s brother and Shalini… and the wife is Sapna! Oh, mercy!

The hitherto smitten Shalini sees her step-mother Rani emerge from Amar’s bedroom and begins to doubt him (indeed, falls completely out of love with him). When Amar’s family arrive to warn him that the police want to interview him about Madanlal’s death, and they are held as insurance in the event that Amar fails to honour the contract. Dear, dear! What a mess!

Ultimately, of course, Amar saves the day and is rewarded by a grateful Thakur with his daughter’s hand. But not before one of the silliest fights you will ever see, with the paraplegic Thakur entering the fray after clambering onto a horse, Amar’s young brother fighting off all-comers with a whip, thugs unable to lay a punch and people being hit on the head with a thick wooden pole and it not having any effect.

But it’s not a fight movie. And it’s clearly not a prison movie, either; when Amar is released, there are still more than 100 minutes of the film still to run. And, it must be said, the prison scenes are woeful… other than an intriguing board entitled ‘Crime Chart’ (in English, not Hindi) in the Jailor’s office, which tallies certain events, including: thefts, accidents, dacoities (armed robberies), murders and suicides. If they are the offences of which prisoners are convicted, you wonder why accidents and suicides are there. If they are events in the jail, the annual (?) tally of murders – 12, 14, 17, 20, 21, 13 and 10 – is a little sobering.

But there is much more to entertain; the impoverished Amar’s constant (and natty) costume changes, his fondness for cravats, him giving his sister a couple of well-meaning backhanders for her lascivious cabaret act (not that the violence is remotely entertaining, but it does show how times have changed)… and, of course, the songs, from which escape is impossible.

The Hindi word ‘joshila’ means ‘spirited’ or ‘impassioned’. ‘Langada’ is apparently the word for ‘lame.’ 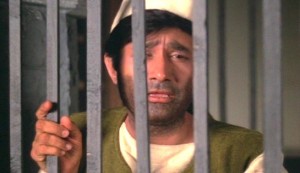 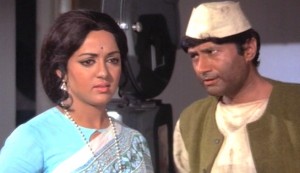 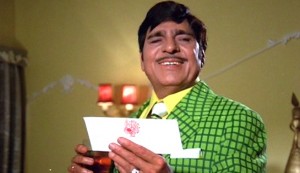 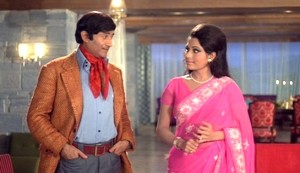 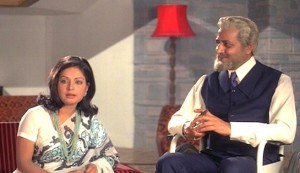 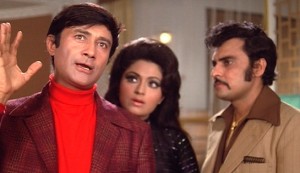