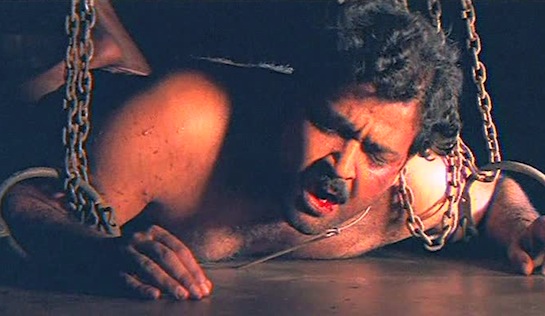 Kala Pani* is described as an ‘epic’ film. It’s a long film, at 2 hours 40 minutes. Even if you edited out the songs (which are slightly at odds with the movie’s dark themes, anyway), the choreographed, vaguely comical fight scenes and the gratuitous model photo-shoot scenes of the main character’s beautiful fiancée… it would still be long.

The film opens in 1964 as a young man seeks to find out what happened to his uncle, who had been imprisoned at the Cellular Jail at Port Blair on the remote Andaman Island around 50 years earlier.  The prison is known as Kala Pani (in English, ‘black water’), and was built by the British in the late 1800s and used to exile and house political prisoners involved in the struggle for India’s independence. The film then traces the journey of the young man’s uncle, Govardhan (Mohanlal), to the Cellular Jail and the brutal treatment he (and others) received there at the hands of the British.

The British don’t come out of this at all well, but it could be worse for them; very few of the actors playing the Britons sound even vaguely British – the butchered accents allowing the possibility that it wasn’t the British who were the real villains after all, but people masquerading as British.

At the prison’s helm is jailer David Berry (Alex Draper), a youngish Irishman, who is ruthless and sadistic. He is ably supported by a wonderfully villainous-looking Mirza Khan (Amrish Puri), straight out of the Afghan army. Together they have much success in running a very unpleasant jail. They set Muslims against Hindus in an attempt to divide and conquer, force a hunger striker to eat human excrement, routinely beat prisoners, have one influential prisoner killed to incite rioting which they can then quell with force, sear prisoners’ backs with branding irons, try to silence prisoners who might seek to be heard at inquiries into their activities (punching a hole in the tongue of one who does), and summarily shoot prisoners who could speak out against them.

Through all of this, Govardhan stands tall. He is an honourable man – a doctor and activist who was arrested at his wedding to the beautiful Pavarthi (Tabu) and charged with setting a terrorist bomb which derailed a train, killing 55 people; sadly, he was trying to remove the bombs from the tracks – supporting the cause but not the method. He strives to keep the peace amongst the inmates, takes the rap to prevent his friend Mukund (Prabhu Ganesan) from being executed after his 12th or 13th escape attempt, supports a conscience-stricken English doctor, Dr Len Hutton (John Kolvenbach), in speaking out against the atrocities on the island, and then, just as his release has been won, throws jailer Berry off the roof of the prison and strangles Mirza Khan after they combine to kill Mukund. He is duly hanged… and Pavarthi grows old not knowing what happened to her husband.

The film is full of drama and colour and evil and goodness. It throws up some songs, escapes, bombs… even some cannibalism, for good measure. But its principal purpose is to show the oppression and the horrors of the British rule. It doesn’t spare any aspect of the British Raj; not its corrupt legal system, its young scoundrels that seem to hold all the positions of power, or its failure to discharge its obligations as a colonial power. It shows scores of Indian freedom fighters being mown down by machine-guns, thrown into dungeons for speaking out, flogged and hanged. It shows the British being committed to no-one (that is, no prisoner) leaving the island alive, irrespective of their lawful sentence.

And it shows a photogenic Indian woman being cruelly denied her innocent husband and the opportunity to bear him children.

I loved one mini-review of the movie which concluded that it was a ‘balanced’ portrait of the Raj because the British were not totally vilified – as if the goodness in one man, Dr Hutton, were sufficient to counteract the exile and wanton massacre of Indians engaged in a political struggle to rid themselves of the British yoke.

I don’t doubt that the use of the prison on Andaman Island is a part of British history of which it is not proud. On the other hand, for Indians Kala Pani seems to be celebrated as a symbol of the fight for independence – not achieved until more than 30 years later. Is the depiction of the abuses accurate or jingoistic? I have no idea.