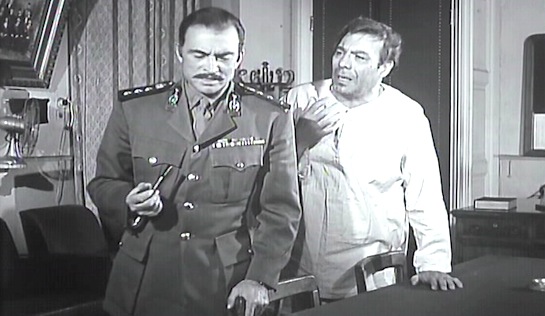 It’s refreshing, I guess, to have a prison movie about relationships that doesn’t involve a prisoner coupled with a guard or a doctor or psychologist. Instead, this features two solid, admirable relationships built on trust. Or maybe one that is solid, and one that appeared solid. And two that are not.

Salem, it turns out, has escaped prison five times, and in doing so has had his sentence upped from 3 years to 30. Which is just enough of a reason for the film to move to a protracted flashback.

Salem was a prominent lawyer, we see, hopelessly in love with his wife of 15 years, Nahed (Hind Rostom). Salem is of such professional stature that he lectures police on penology. “A prison inmate is a sick man,” he says. “He needs care and treatment to get better.” He advocates the classification of prisoners, keeping prisoners who are used to crime apart from those new to it in order to avoid corrupting the latter, and for this he receives spontaneous applause from a lecture theatre crammed full of constables.

Nahed has a much younger (and profligate) brother, Kamel (Nour El-Cherif), about 20, whom Salem treats like a son – he keeps bailing him out after he gets arrested for fighting, gives him money, is eager for him to join his legal practice, and so on. Kamel, who is nothing short of a cad and a bounder, pressures his girlfriend Mona for sex, gets her pregnant, and then refuses to marry her. The distraught Mona confides in Salem, and Salem, not wishing to distress Nahed, signs papers as the father of Mona’s child to enable her to have an abortion… but she dies in the operation. Both Salem and the doctor are charged (with licentiousness-related offences), and found guilty after Salem in defending himself stoutly refuses to implicate Kamel.

Salem gets three years jail with hard labour and Nahed, heartbroken, feeling betrayed and unforgiving, refuses to visit him. Somehow, between Mona’s death and the court’s verdict, Salem was unable to find the time to tell his wife the true story… and so in desperation he keeps trying to escape so that he might see her and set her straight.

After his fifth escape he tells the Warden-known-for-his-firmness-and-tact the whole story. The Warden duly bluffs his way into a party attended by Kamel and his wastrel friends, and dupes the young good-for-nothing into admitting that he once got a girl pregnant and allowed another man to take the blame. But the penny drops: Kamel realises that the authorities might be onto him, and looks to run away – but also realises that he has no money. He sneaks into his sister’s bedroom to get some cash; Nahed’s health has inexplicably and rapidly deteriorated and she is near death, but she is awake enough to see Kamel steal from her, and her condition worsens further.

The Warden tells Salem about Kamel’s confession (of sorts) and of his wife’s dire condition. Salem pleads to be allowed to see her. The Warden risks his career by allowing Salem to sneak home… on the condition that he is back in two hours – by 10 o’clock. They shake on it; Salem gives him his word of honour. Salem gets to see his wife, and in her final moments she gives the smallest of indications that she knows that her brother is a rotter and a scoundrel. But Salem can’t drag himself away, and at 10.10 is still by her bedside….

…at which time the Warden is advised that the Major General has decided to pay a surprise visit to the prison. The Major General is greeted… and naturally wants to see all the troublesome prisoners, including that lawyer who keeps escaping and whom his Lieutenant Commander has assured him is safely contained (even though he hasn’t yet returned). He proceeds purposefully to Salem’s cell – to find him securely locked away, penitent and promising not to escape again.

Salem, you see, was a faithful man, a man of honour. His bond with the Warden was based on mutual trust and respect. Salem and Nahed had a solid, loving marriage based on trust and respect, and in which a high value was placed on fidelity (but unfortunately for both of them proved not quite so solid when the chips were down). Kamel, on the other hand, was a louse and a heel who treated Mona shamefully, and dishonoured his sister and brother-in-law in a most non-honourable way. You can’t accuse the film of too much subtlety. Strange, though, that the most robust relationship is one between a prison Warden and an escapee from his prison.

Man of Honour is from the post-Nasser, Sadat era. The women have big, 70s hair and mini-skirts. The prison, more traditionally, has rock-breaking and mess-room protests and power struggles and a raucous humour. Not so traditional is the prison’s Warden, who responds to a prisoner’s sad story by conducting a covert and rather elaborate investigation himself, and who then risks dishonour and a distinguished career by trying to make things right. One hopes, for his sake, that his prison was not full of tragic stories in which he felt compelled to get personally involved.

The film is a touch melodramatic, is punctuated by a number of unintentionally comedic scenes and constant reminders of the clash between traditional conservative values and the (then) modern Egypt (with partying and irresponsible behaviour and girls being pressured to drink alcohol and have sex). At its heart, it has a tragic story in which the traditional values of trust and honour are strongly promoted, and yet the safest relationship founders because of a bewildering lack of honesty. That may be its true tragedy.