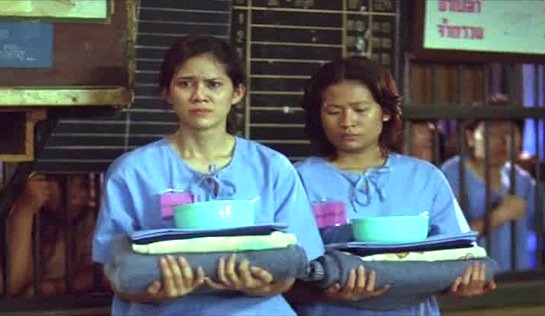 There is no shortage of messages here. “Prison is a state of mind; the walls, the bars, the locks, the barbed wire,” is the upfront one, direct from director Sananjit Bangsapan. But then the leading lady boasts that ‘Stoicism overcomes all’, and others’ stories remind us that ‘One doesn’t have to be in prison to be imprisoned’. Or for life to be tough, for that matter. And finally we’re cautioned, by one who should know, that ‘Sex causes trouble’. So many messages! So little consequence.

The film opens with friends gathering at the death of Daosawai, or Dow for short. The friends were all connected with her twenty or more years earlier, when she had just got out of jail and the others were all involved in escort work – the madam, two workers, and one client – and she was living with them, a confidante rather than a call girl, devoting her time to writing a book based on her prison experience.

Dow (Srungsuda Lawanprasert) would seem to be a remarkable woman. We get a sense of just how remarkable she is when, in the first of many, many flashbacks, she surprises her boyfriend in bed with another woman and fires six shots into him, mostly at his groin, and manages to kill both of them. She lands in Khang Paed, or Cell 8, of the women’s prison. It’s a roomy cell, sleeping 80 or so on the floor.

For a film that purports to be about prison, the prison scenes are few and far between. Dow and fellow-murderer Pak (Anuwan Preyanon), a nurse who shot her teenage daughter’s rapist rather than wait for the court to deliver its verdict, start their prison stints on the same day. They are schooled in prison life by a boyish double-murderer, Pen (Darika Sangnark), but Dow – a university-educated woman – is consistently targeted by the prison’s Queen Bee who seeks to ‘own’ her. Dow boldly (and a bit naively) resists but they have several very nasty confrontations, including one in which Dow is raped with a cucumber and another where she inflicts revenge with commensurate violence.

While Dow’s prison experience would seem to be absolutely critical to the plot, most of the screen time is taken up instead with the tangential stories of three other women – friends of Pen’s – with whom Dow lived in Bangkok after serving her ten years in prison: Madee, the escort agency madam who retires to an orphanage after coming close to shooting her cheating young lover; Aroon, a call girl who marries a businessman client rather than the poor writer who was also in love with her, becoming a businesswoman herself in the process; and Eiad, a bubbly young girl who gets murdered just as she is about to get out of the escort game, set up a beauty salon and take up with a respectable wealthy client. It seems that the primary purpose of these vignettes is to make one impatient to get back to the prison story, which is one of stoic survival.

It is a very desultory film. It flits back and forth from the present time to 20 and 30-odd years ago, with little discernible change in the appearance of most of the cast. But it even looks disjointed; the prison scenes appear to have been shot on location, while the apartment in which everyone lives after Dow’s release looks like a horrible set for an awful TV soap.

There is an honesty about the prison scenes. That’s not to say that there’s anything novel or special about them, but they are solid and dependable. As is the stoic Dow, it seems, but then we learn nothing really of her life after her release from prison. She wrote a book, had a son; that’s it for 20 years. All else – including how her prison experienced influenced the remainder of her life – is a mystery, and it is hard for her to carry the film when we don’t really know her at all.

In the end, the dominant sense one is left with is of how few of the stories turn out well. Dow’s father doesn’t survive her imprisonment, Dow herself is still a youngish woman when she dies, Aroon is powerful but unfulfilled, Pak dies in prison from colon cancer, and Pen dies, presumably executed, after stabbing the Queen Bee in the ultimate power play. There’s much sadness, if not misery. Stoicism isn’t sufficient to overcome everything, it seems. 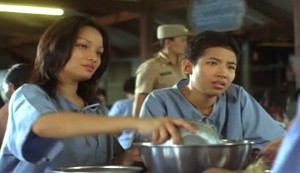 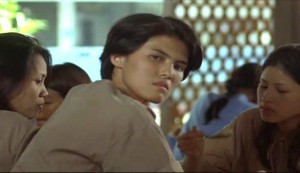