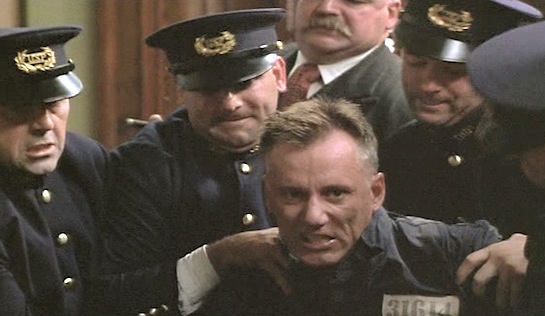 It’s not uncommon, in my experience, for certain corrections officers to be attracted to the most extraordinarily difficult prisoners; there is something in being seen to be the only one who can manage the unmanageable, or the only one who seems to understand what makes the monster tick. Perhaps that’s what drove Henry Lesser to become the confidant of serial killer Carl Panzram.

It’s 1929. Lesser (Robert Sean Leonard) is a middle-class Jewish man, ill-suited to his new career as a guard at Leavenworth Jail, Kansas. It’s not clear why he has joined up. He has leftist leanings, is well-read (if not mildly intellectual), and is uncomfortable with the violence he is certain to encounter. Is it the danger, as the newly received prisoner Panzram (James Woods) suggests? Or does he really believe he can help people? Is it that he gets to play amateur psychologist, or maybe that is he simply a voyeur?

It’s tricky. The story is based on the odd, real-life relationship between Lesser, who risked much to smuggle Panzram pencil and paper so the prisoner could write his life story, and the prisoner who ultimately bludgeons another guard to death and is hanged for it in 1930. While Panzram is shown to be both brutal and vicious (killing many men and horribly betraying the trust of the two people who treated him much better than he deserved), he is also portrayed somewhat sympathetically (the product of a deprived childhood, the victim of beatings in jail for little reason, and possessing a good intellect and a passion for literature).

Without that sympathetic treatment (complemented by the quaintly nostalgic feel of a Depression-era prison, reminiscent of The Green Mile), there is little to keep you interested in either man. If Panzram has no redeeming features both men could be readily dismissed; the inmate as a monster and his keeper as a fool.

And that’s where the problem lies, if you look at the real-life story. Panzram’s journal, not published until 1970, suggests that he killed 21 people, many of them vulnerable, some of them children. “I (consistently) preyed upon the weak, the harmless and the unsuspecting,” he wrote. From the age of 16 he began sodomising men at gunpoint, and he claimed to have sodomised over 1,000 – including an 11-year-old African child whom he later murdered, along with two young children in America. He killed others for no reason. If we knew this, when Panzram goes willingly to the gallows, claiming a victory for justice, none of us would ask – as Lesser seemingly does and notwithstanding all that we have seen – whether there is the slightest bit in him worth saving. 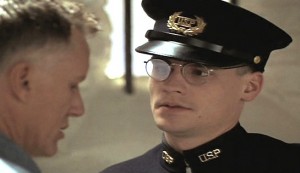 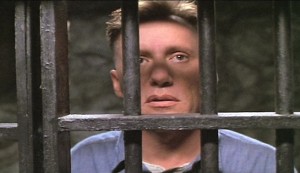