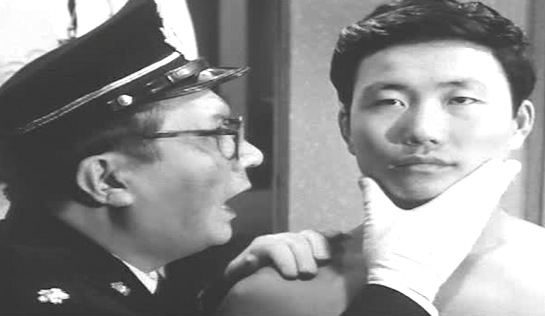 A 1967 poll found that 71% of Japanese opposed the abolition of the death penalty. To those in that handsome majority, director Nagisa Oshima asks: “Have you ever seen inside an execution chamber? Have you ever seen an execution?” And one steels oneself for an uncomfortable two hours of docudrama polemic or a voyage through the mechanics of the gallows. That’s not quite what you get.

The film is inspired by the case of Ri Chin’u, a poor but immensely talented ethnic-Korean who killed two girls in what is quaintly known as the Komatsugawa High School Incident in 1958. It starts with an attempt to execute a 22-year-old man not unlike Ri Chin’u, known here only as R (Yun-Do Yun), who has been found guilty of the rape and murder of two young girls four years earlier. R is indeed hanged, but remains dangling and alive at the end of the rope, his neck still very much intact.

What follows is satirical romp as the assembled officials endeavour to work out what to do next. While R has survived and is polite and docile, he initially has no real memory of who he is, or what he has done, and the group is unable to decide whether it is proper to re-hang a person who is no longer competent. The Public Prosecutor washes his hands of the problem, noting that the execution is the responsibility of the jailers. The Security Officer is all for having a second shot at it, but the Catholic priest (Toshirô Ishidô), who has just performed the last rites, insists that killing a man after his soul has gone would be immoral and illegal.

The Prison Director (Kei Satô) calls upon the Education Officer (Fumio Watanabe), with whom R has had a close relationship, to bring him back – and get him to admit his guilt – so that another attempt might be made to execute him. The Education Officer promptly embarks on a series of re-enactments of R’s childhood and his awful crimes in an attempt to jolt him into recognition. All the prison officials (and even the priest) play out the rape and murder scenes with great gusto. They also role-play his drunken father, deaf-mute mother and siblings, exhorting each other at times to being more Korean, more vulgar.

And so from what had become a series of questions about whether it is right to execute a young man who was working days and studying nights, and who came from a very impoverished background, the film drifts into questions of how the ethnic Koreans are treated in Japan, and whether the crimes could be one man’s personal protest – a nationalistic attempt to repay the Japanese for the wrongs perpetrated on the Koreans. And it questions whether some of the jailers, who have previously had experience of killing in wartime, sometimes in circumstances of very dubious morality, are fit and proper persons to perform the execution.

The last thing you expect as you circle above the execution chamber in the opening scenes, and then tour its salmon pink interior, is a farce of extravagant proportions and biting satire. That’s what you get. 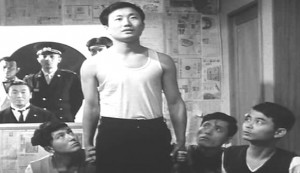 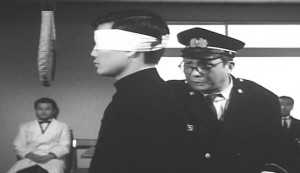