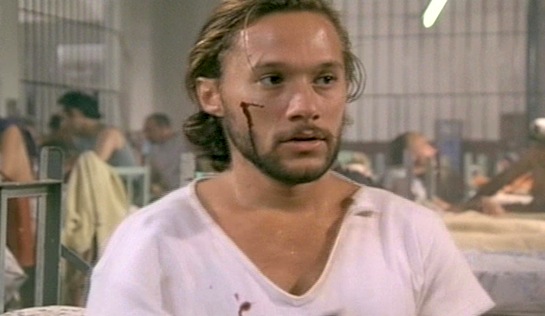 The product description promised English sub-titles, the DVD itself teases by allowing English sub-titles to be selected… but nothing. So it’s a bit difficult to rate, this one; my Spanish is very poor indeed, and half the reviews of the movie on the web very earnestly outline the plot of an entirely different film and so offer no help at all.

But it’s about a young man, Marcos, the son of a judge, who gets pulled up at a border checkpoint and is found with drugs tucked away in his car. It seems that he’s innocent. He’s also young and sort of fresh faced, so you know that he and prison won’t mix particularly well. Anyway, he gets whisked off to Colonia Penal El Dorado, which is your standard one star prison facility. He churlishly gets up the nose of the chief guard upon reception, but the guards drop off their ritual beating of him when, presumably, they get told that his father could sentence them if he survives and can identify them. Or perhaps they’re just told that he has lice. Anyway, they stop beating him and he waits for his father to come to his assistance. And waits and waits.

Meanwhile, he has to negotiate life in a dormitory with around 20 large, sweaty men, some seemingly not well disposed towards him. Or each other. There is the mandatory rape (of another prisoner, not our hero) and a typically brutal jailhouse assault. Marcos has to learn to sleep with his eyes open, to fight and to work out who he can trust.  He seems to learn these so well that he drowns (yes, drowns) a man in what appeared to be a kill-or-be-killed encounter, or perhaps it was foreplay gone horribly wrong; sometimes sub-titles would be handy. His beautiful girlfriend sticks by him, and through her dedication seems to unearth something important. Corruption? Evidence of him being framed? His untold wealth from his drug running activities? I can’t say. Then his father turns up at the prison to see his son; they hold guns to the heads of several guards, and Marcos escapes through the front gate, into the arms of his girlfriend and presumably across the border in a slow boat, leaving sacrificial dad to face the music. Touching. 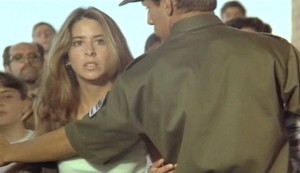 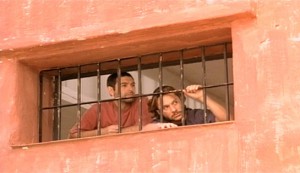