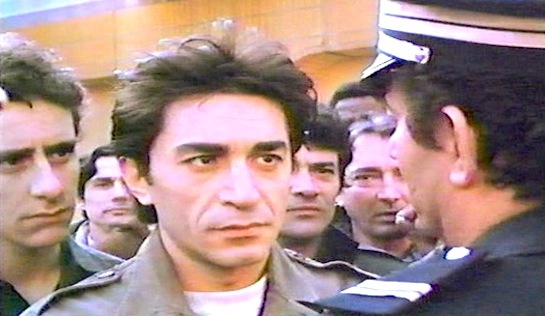 Bruno Vinclert (Richard Berry) is not so much an innocent man in prison; he is more of an accidental prisoner.

An actor, he is shopping in a Paris supermarket when an attractive young woman casts flirty glances in his direction from another aisle. The woman is then apprehended outside the shop by store security, and accused of shoplifting a jar of caviar. Bruno goes to her assistance and offers to pay for the item, but is assumed to be in on the theft and finishes up getting involved in a scuffle with the security man, during which the woman slips away.

Although it is a relatively minor matter, Bruno lands in jail for it. There, it’s fair to say, he has mixed fortunes. He is delighted to receive a visit from the mystery supermarket woman, Patty (Victoria Abril), who commits to continuing to see him and fight for his release. But his cellmate stabs himself in the throat with a fork, and then he is unluckily taken hostage by the prison’s top dog, a gangster named Constantini, in an armed escape bid.  From the top of the perimeter wall and with Bruno in the firing line, Constantini shoots at an armed officer, Lorca (Richard Bohringer), hitting him in the kneecap… and Lorca, in an attempt to save face, subsequently claims that Bruno pushed him to prevent him from getting an accurate shot off at the escapee. A judge agrees, and Bruno gets another two years added to his sentence.

He is then moved to a very modern, but sterile, maximum-security prison… to which he finds that Lorca has also been transferred, at his request. Lorca has been left with a plastic knee, a permanent limp, a nasty grudge and a taste for vengeance. He makes sure that all the other prisoners have a set against Bruno before he arrives. One in particular, José (Farid Chopel), leans rather menacingly on Bruno, threatening to have Patty harmed if she doesn’t bring in 2,000 francs each time she visits.

Despite a warning from the prison director, who is suspicious of Lorca’s motives for following Bruno to his jail, Lorca continues to get in Bruno’s face. He persists in stalking Bruno, regularly detouring into his cell, on his own, hoping to provoke him into giving a reason to make life more difficult for him.

But Bruno’s more pressing problems are with José. They have one physical encounter in the yard, another following a little dispute in the wooden furniture workshop, and then a final confrontation after a shakedown results in a quantity of cocaine being found in José‘s cell. Egged on by Lorca, José is convinced that Bruno has tipped staff off and is keen to settle the score. Their showdown is about to end with Bruno holding José at bay with a spike – right up until officers rush at the latter man from behind, propelling him into the spike and killing him. Oops.

Bruno knows that a showdown with Lorca is also not far away. Not that he has to be too perceptive to form this view – Lorca attends his cell one night with a flick-knife, which he holds to Bruno’s cheek. But the tables have turned, somewhat; Bruno knows that Lorca would have some difficulty in simply stabbing him in his cell, and taunts him. His growing obsession with Lorca starts to frighten Patty. Yet it means that when Lorca makes an unscheduled late night visit to his cell, he is prepared. He overpowers Lorca, ties him up, steals his uniform, and escapes on his motorbike – only to be nearly mown down by Patty, who had been waiting outside the prison to remove her beau’s little problem.

Yes, the story is a little improbable. It’s hard to see him in prison in the first place – a law-abiding actor who went to assist a stranger who had stolen a trifling amount. And then, as a much-too-brash prison novice he takes on the biggest guys in the prison… and comes out on top.

But the themes are classic themes: prisoners with status standing over new prisoners, trying to extort money; a hateful, vengeful prison officer setting up a prisoner whom he doesn’t like; two audacious escapes. Some classic mind games and a hint of madness from both the wrung-out prisoner and the obsessive officer. And a love story to boot. 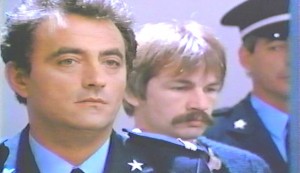 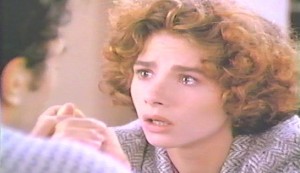