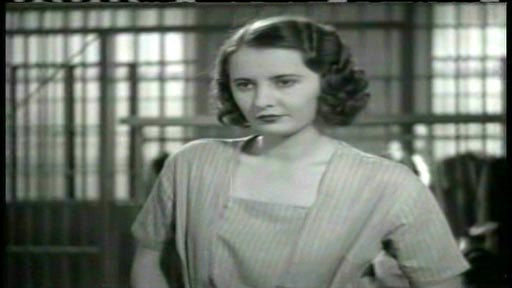 Adapted from a play by Dorothy Mackaye who spent a spot of time in San Quentin herself, this is one of the earliest Women-in-Prison movies. Quite a few actresses have since borrowed heavily from Barbara Stanwyck’s portrayal of a tough gangster moll in prison, while the film Lady Gangster (1942) borrowed heavily from the whole first half of the movie. Well, stole it, actually.

Nan Taylor (Stanwyck) acts as a decoy in a bank job. While her mates get away with the loot, she has to stay at the scene. The DA knows she was involved but can’t prove it. He is just about to release her into the care of one of his harshest critics, radio evangelist David Slade (Preston Foster) who knew Nan when they were kids, when Nan confesses to him. David is very much attracted to Nan, and seemingly isn’t put off by her criminality – despite campaigning for the DA to be much tougher on crime. Mind you, his love for her doesn’t stop him giving evidence against her at her trial. Nan is less than pleased. She stoutly refuses to put in the others, and cops 2 to 5 in San Quentin.

Her jail-time is standard fare for this type of movie, but at least this movie can claim to have been this type of movie before nearly all others. Nan immediately has a run-in with the unpleasant Susie (a Slade devotee), but is made much more welcome by the amiable, husband-killing Linda (Lillian Roth). The ensemble cast includes an old dowager who treats an African American prisoner as her slave, and the African American woman who stands up for herself… only to lose all dignity and be reduced to a terrified mess by a cockatoo, of all things, perched on Second Matron Noonan’s shoulder. And there is a show-stealing madam, Aunt Maggie (Maude Eburne) who brings comic relief to every scene she touches.

Nan resists all attempts by Slade to make contact with her. Initially. Then she gets word that her bank hold-up mates Don and Dutch have been locked up for 20 to life, and are trying to break out via her cell. She’s asked to get a plan of the women’s section to them. She does. She’s asked to get the shape of the cell key, which she does, impossibly, by making an imprint of it while Noonan is chatting to her, holding the key bunch. She smuggles the letter with the key design out via Slade, whom she finally allows to visit – but it’s redirected into the men’s prison and the guards chance upon the escape which is going ahead at that very moment (Don and Dutch seemingly having had no need for the key design after all. Or perhaps they couldn’t wait). The escape is foiled, Don and Dutch are shot and killed, Nan blames the ‘pious stoolie’ Slade (thinking that he had blown the whistle instead of posting the letter), and she gets to serve an extra year (without privileges) for her part in the escape bid.

When she gets out she has some evenin’ up to do. She goes to one of Slade’s revival meetings, shoots him (somewhat accidentally) in the arm, and has to contend with Susie, who has also been released and has ingratiated herself into the Slade inner circle. When everyone rushes in on hearing the gunshot, Slade covers for Nan and tells the Police that they are about to marry. And, as could only happen in movies such as this, they do.

My guess is that the real San Quentin’s women’s section in 1932 was a bit different to that in Ladies They Talk About. The women in the movie aren’t housed in cells, but in large rooms which they are able to decorate with lace and soft furnishings… and Nan even has a gramophone player which comes in handy when trying to drown out the sounds of tunnelers below. And there are nice-ish gardens through which one can wander should one wish. Incoming mail is not routinely inspected (Nan gets some fairly incriminating messages through the post), but fortunately for the guards they do look at the one letter which they need to in order to discover the escape plot.

I suspect it might have worked better on the stage.