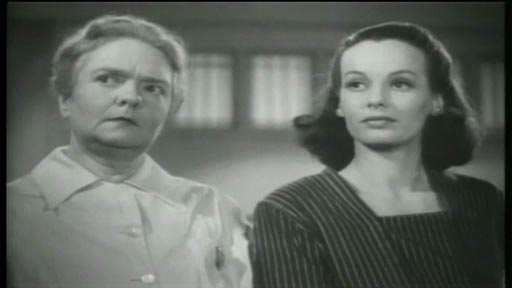 This is a neatly packaged, fast-paced war-time prison flick with a sizable piece of the action taking place outside the nick. At 61 minutes, with a robbery, double-crossings, stoolies, a car chase, an escape, a shootout and a romance, at least you’re not sitting around getting bored.

The first part of the plot is directly lifted from Ladies They Talk About (1932). Faye Emerson plays Dot Burton, a struggling actress who joins in on a bank robbery with some struggling gangsters who live in the same apartment block. She plays her part well, conning the bank’s guard to open the doors early, but when her gang run off with the loot and the Police arrive, her innocent bystander story comes unstuck when she doesn’t know the name of the small dog she was carrying in role.

She is released from questioning into the custody of a powerful broadcaster and critic of the DA, Kenneth Phillips (Frank Wilcox), who had been called in to help the DA get the truth from her (yes, a novel investigative approach). Kenneth trusts her implicitly because, luckily, they grew up together. She races home to find all the rest of her gang (all, that is, except Wilson, played by a young Jackie Gleason) cutting her out of her share of the $40,000 proceeds from the stick-up. They hide the money and scarper when the Police arrive; she retrieves the dough, stashes it, comes clean to the dashing Kenneth and winds up in the nick.

The prison scenes are good ensemble fun: a stern Matron, Mrs Stoner, presiding over a prison that is “neither a country club nor a concentration camp”, a couple of reviled stoolies (the especially loathsome Lucy Fenton and Annie, a deaf lifer who lip-reads everybody’s critical conversations), a good buddy, Myrtle (with whom all the key plot lines are shared), and a staff member, Jenkins, who is the sole guard on duty whatever seems to be happening. And Dot, of course, who remains coolly elegant throughout in her designer prison uniform.

Dot unashamedly uses Kenneth’s influence to try to win an early parole. Lucy, using information lip-read by Deaf Annie when gang leader Carey Wells visits Dot, dressed as a woman, trying to find what Dot has done with the money, and passes it on to Mrs Stoner in order to sabotage Dot’s parole prospects. Dot is led to believe by Lucy that Kenneth double-crossed her, so she sets him up to be killed when he goes to collect the money with which she hopes to buy her freedom. I hope you’re following this. She then sees the Matron, who lets on that Kenneth hadn’t double-crossed her but then refuses to ring him to stop him from walking into Dot’s trap. Dot is forced to knock Mrs Stoner on the head and escape, posing as the good Matron. She gets there just in time to assist Kenneth elude the gang (not before he gets shot in the process), and there is much excitement with chases and people being killed and Dot remaining coolly elegant.

And it has a lovely romantic ending, because, of course, if you were a debonair, successful broadcaster like Kenneth it would be hard to resist falling in love with a woman you hadn’t seen in years but whom you know is now a gangster-running, bank-robbing jailbird, not averse to having you set up to be killed if she thinks you’ve done the wrong thing by you. Nice.

Oh, and just one mention of Hitler in the whole show. 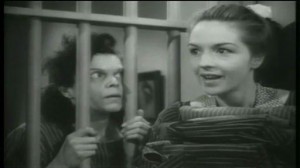 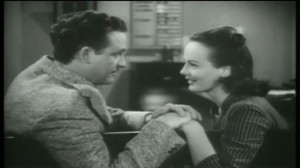