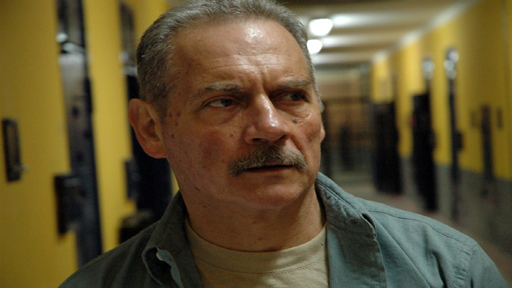 Fabio is a committed but intense, on-the-edge young man who works in a programs-type role in a secure prison, arranging reintegration leaves and putting up cases to the Parole Board.

We know that there’s plenty of tension in his life; at work he is confronted by an angry prisoner about whom he’d written an uncomplimentary report, while it seems that at home he has been strangely avoiding contact with his beautiful girlfriend, in part because of unresolved friction with her disapproving father. And all that’s before he is asked to work with a remorseless new reception, Sparti Luigi, who has done a lazy 20 years for murder (with ten more still to do) – and realises that it’s his father, with whom he’s had no contact for that 20 year stretch. Being face-to-face with his father brings some raw, barely suppressed emotional baggage to the surface and he delights (which is probably not the right word because it’s an activity from which he takes no obvious delight) in baiting his father, who proudly wears a tough prison exterior and unwittingly lies to his son that his family wanted nothing to do with him. It takes Fabio some time to let his father in on the secret. Sparti has been a hard man inside and out of prison, and the relationship is a testy one on both sides: Fabio desperately wants his father to express regret and acknowledge the hurt that he caused his family, and Sparti feels trapped and resentful of being pressed into ‘acting like a father’ 20 years after abandoning his wife and kids.

Fabio goes out on a limb to advocate, successfully, for Sparti to get unescorted day leave. He duly meets him at the gate and, in the day that they spend together, some of the barriers begin to be broken down. But all is not rosy. Fabio makes a critical mistake in tricking his father into seeing his daughter, Christina, who cannot forgive him for destroying the family and who wants her brother to have nothing to do with him. And Sparti begins to understand just how much of an outsider he is in the free world. The complexities of the relationship are powerful and intriguing, and on that level the film succeeds.

But it’s a stretch to believe that anyone could meet their father under such circumstances, and refrain from telling anyone with whom they work, or otherwise betray the secret. Fabio, however, keeps it to himself and very much places his career at risk, one would think, by not declaring his conflict-of-interest in obtaining day leave for a bloke he has hated (yet pined for) all his life, and dangerously running around with him and giving him money on the outside. It’s a construct that doesn’t quite ring true.