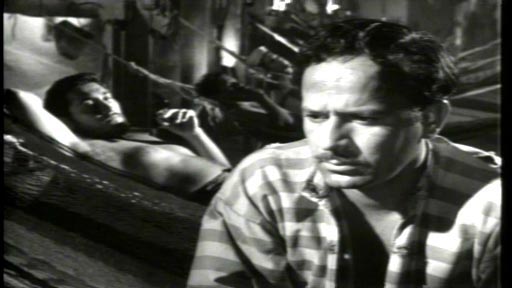 This is a simple story about honour. And love. And how one man finds them both on an island penal colony.

The film kicks off with a doting mother, Rosa, preparing to throw a party for her son Ricardo’s graduation to lieutenant. She describes him in such glowing terms to all and sundry that you know that calamity’s just around the corner. Honourable and decent, just like her late husband, he is… while her other two children have let the family down badly: Alejandra smokes constantly and is defiantly seeing someone whom she has been told not to, and Felipe is a no-good wastrel, spending his time singing and womanising.

The party in the family’s grand home is going well… until Alejandra leaves and shoots her lover dead. Ricardo and Felipe (whom Ricardo has dragged away drunk from a cabaret) arrive on the scene, facilitate Alejandra’s escape and dispose of the body. All three siblings then present back at the party as one big happy family. The Police arrive. The honourable Ricardo, still in his lieutenant’s uniform, confesses to the crime to save his sister, asks to get his things, and shoots himself.  Felipe (Pedro Infante) then steps up and claims responsibility to protect his brother’s memory and reputation… and that of his fairly ungrateful sister.

He’s sent to Las Islas Marías (the Mary Islands), which have been a federal penal colony since 1905, and are still used for that purpose (amongst others). About a quarter of the current crop of prisoners live there with their families. Even in 1950-51 (at least in this film account) there are women prisoners liberally mingling with the men. Greeting the new arrivals is a beautiful young nymph, María (Rocío Sagaón) who flits shyly from place to place, and whom we later learn was born on the island to a prisoner who has since died. She seems to combine helping the prisoners out in the kitchen with innate artistic dancing in a two-piece costume on the beach.

The penal colony is no picnic, but Felipe, no more the wastrel, works hard and is put in charge of other men. He also falls in love with María, who for some odd reason has taken a fancy to him. She knows enough about what’s going on in the prisoners’ quarters to know that Felipe has been planning to escape with his mate ‘El Silencio’; she implores him not to. When the time comes, Felipe tells The Silence that he’s changed his mind; he wants to continue to be good. And honourable, like his late father and brother. The Silence stabs him in the back. The escape bid fails. Felipe survives.

Felipe’s reformation is ultimately recognised, and he is released. He presents ready to return to the Mexican mainland not only with María, but also a young baby in his arms. How did that happen? Upon arrival they immediately seek out his dear old mum, who in his absence has been blinded in an industrial accident at the brickworks factory where she worked. Things haven’t gone so well for the family while he’s been away; Rosa has had her house taken away from her and is now begging in the streets, and Alejandra has become a prostitute. They find Rosa praying for her Islas Marías son in a beautiful church. They embrace; the lost son has returned. Ahhhh.

Pedro Infante was Mexico’s biggest film and music idol at the time Las Islas Marías was made, so the film couldn’t really go in any other direction, could it? Filmed on the islands, there may well be a degree of accuracy in how life was in the penal colony at that time. But it’s not a film I’d rush out to see. 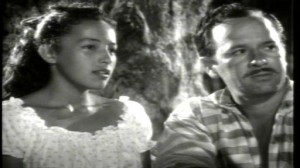 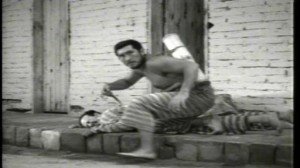