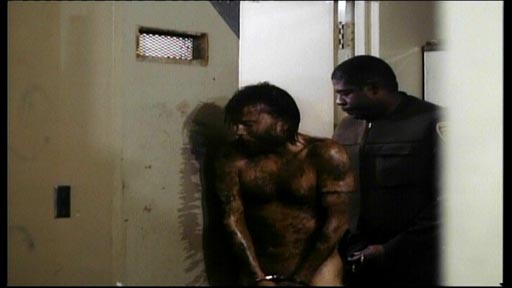 It sounds interesting: a white prisoner on death row and his African American guard learning about themselves through the bond they develop. But things start badly in this visually murky, made-for-TV drama, and don’t get much better.

Using the Soledad Correctional Facility in California as a backdrop, the film kicks off with the prisoner, Denver Bayliss (Kiefer Sutherland) being removed from ‘the hole’, animal-like, after five weeks.  Bayliss is undoubtedly a bad man.  He has killed fellow prisoners repeatedly since he was 17 and most recently slit the throat of a 21-year-old guard.  It is this latter offence for which he has been sentenced to death.  He emerges from the pitch-black punishment cell naked and covered from head to toe in dirt and faeces. The guard supervising him, Fred Whitmore (Forest Whitaker), shattered by being forced out of the Police force after an unjustified shooting, (a) has no back up, (b) is brand new to the job, and (c) keeps placing his bare hand on Bayliss’s soiled back to guide him towards the showers.  I don’t think so!

Whitmore hates not being a cop, is stressed to the max just seeing what the system did to Bayliss in five weeks, has all sorts of mixed emotions about his late alcoholic father who used to beat him, is a walking time bomb himself and is becoming increasingly unable to be a loving husband and parent.  Bayliss was a shoplifter who was never violent until thrown into adult prison as a teenager; who killed an innocent guard in response to cruel mind games played by other officers.

The writers make sure you don’t miss the ironies.  Whitmore objects to the gratuitous violence being dished out to Bayliss while we know that he was kicked out of the Force for a shooting that didn’t stand up to scrutiny. He goes out on an ethical limb and reports his Lieutenant for improper conduct against Bayliss, while we know that at the same time he has been assaulting his wife. Bayliss has been sentenced to die for his latest act of violence, perpetrated under extreme provocation, while Whitmore’s violence towards his family is unprovoked. In the end, the guard and the guard-killer, both at odds with the system, find respect and humanity in each other.

It’s all a little too contrived, a little laboured, and more than a little unlikely.