This is the story of a political prisoner and his devoted partner. And of her strength, when she was certain that he was the stronger one.

Pierre (Omar Sharif) is a leftist rebel. Well, a hander-out of leaflets and supporter other things of which the authorities do not approve, like attempted assassinations. He, along with his co-conspirators, are rounded up and sent to a rocky island prison, where the regime is unremittingly tough: the prisoners are required to dig trenches and fill them in one day, and scrub the rocks clean the next. The guards are quick to employ their batons encourage those who show any signs of tiredness (even the elderly and TB-riddled, of whom there are many), in order to improve their rock scrubbing productivity.

Pierre’s lover, Helena (Florinda Bolkan), puts her life on hold and moves closer to the sea so that she can gaze longingly across at the island on which he is imprisoned. She is extraordinarily straight-backed, stoic, serene, and faithful. She follows her daily routines assiduously; paying no heed to the plodding secret agent who conspicuously follows her everywhere, and petitioning the Ministry – seeking an outcome on her application to visit Pierre (only to be met, invariably, by requests for more information by one of the assembly line of women, all dressed identically in metallic silver, all working parts of the large bureaucratic machine). At night, once home, she rips her favourite dresses to shreds to unconvincingly weave the cloth into a blanket on a large loom. And dreams of being reunited with Pierre.

Pierre’s dreams are harder to discern. Survival is important. And navigation around the strange prison is tricky: the guards are brutal but those prisoners who don’t have TB seem surprisingly well; supervision is strict but strands of loose barbed wire are the only barriers to moving from one area on the island to another; the Commandant (Pierre Michaël) oversees the brutality but courts Pierre to share a game of chess and a whiskey with him.

And then, Helena finally wears down the Ministry and a visit is approved! By then, Pierre has been in custody for more than three years. The Commandant fears that Helena has been sent to spy on him. But it proceeds.

On the day of the visit, Helena’s path to the prison from the jetty is lined by hundreds of men who have not seen a woman in a very long time. She takes with her the blanket of love and memories. But when she gets to see Pierre, he is flat, broken, shaky. He seems to have been got at, nobbled, brainwashed. He doesn’t seek out her touch and can hardly meet her gaze, or speak. She sees the spark and fight gone from his eyes. She tearfully accuses him of giving up, of enjoying martyring himself while his friends outside enjoy themselves, of not wanting to get out, of abandoning the shared dream to be together again, of – in effect – betraying her love and faithfulness when she still needs him. He has not held up his side of the bargain. It’s not the visit that she dedicated more than two years of her life to achieve.

The visit over and with Helena escorted back to the launch, Pierre picks up the blanket, which has been discarded on the ground, and, draped in it, joins his fellow prisoners, growing in defiance and resolve with each step. At the top of the hill, he punches a guard on the chin and continues to try to do so again and again, despite getting knocked down repeatedly. The guards are unforgiving. He is taken to a tree, strung up by his ankles and beaten until he has no life left to throw at them.

It’s one way to say sorry for caving in, for not being strong. Powerful. 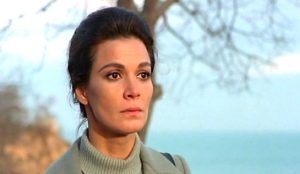 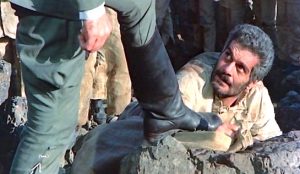 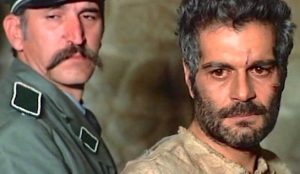 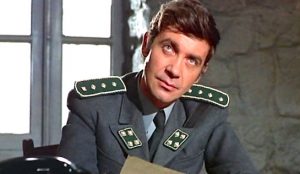 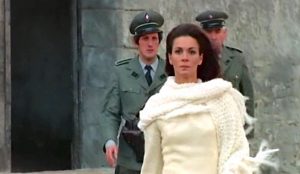 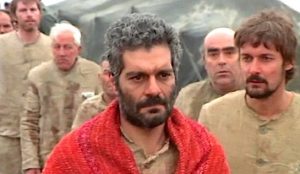