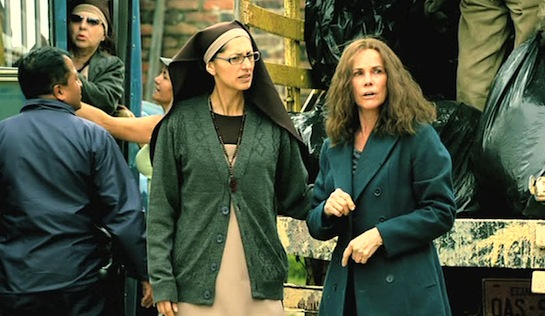 Based on a true story, this is, but it bears a remarkable similarity to another based-on-a-true-story film, Hell in Tangier (2006). Except on this occasion, it is an ill, innocent American woman being held in an Ecuadorian prison, rather than an ill, innocent Belgian man being held in a Moroccan prison. There is, it seems, more than one innocent person held in a nasty third-world prison with a story to tell.

The real Sandra Chase was arrested in Ecuador in 1995 with a male friend, and was released from jail on humanitarian grounds in 1997 after a campaign spearheaded by her daughter, Tammi, but given vital political impetus by Rep Corrine Brown in Congress and media support through a spot on 60 Minutes. She had been in jail 22 months. Tammi co-produced this made-for-TV movie in part, it is suggested, in order to recover some money after selling her mother’s house to fund her defence, pay bribes and – if the movie can be believed – bankroll an escape bid. You might be excused for suspecting that her producer’s role doesn’t guarantee total objectivity.

In the film version, Sandra (Barbara Hershey) is convinced by Tammi (Rachael Leigh Cook) to go on a holiday to Ecuador with a male friend, Nick Sakeris (Vincent Irizarry). It’s Sandra’s first trip out of the US and she has a wonderful time… right up until she gets arrested at the airport on the way home, and is charged with carrying two substantial packages of cocaine.

She is placed in El Inca Prison in Quito. It is one of those ramshackle South American prisons, not unlike the one in Get the Gringo (2012), with its own economy, own rules, corrupt and brutal guards and assorted family members – although the conditions and hygiene in the real-life El Inca are said to have been particularly bad. Sandra is routinely robbed, the parcels sent to her are seized upon by the other women, and she doesn’t have language with which to fight back. She is utterly impotent, and just like Hell in Tangier, she is let down by her own embassy staff, who presume her guilty and consequently do nothing to assist her.

She does, however, have two allies; Sister Maria (Christina Marcán), an English-speaking nun in the prison, and Tammi, who refuses to give up on her. Oh, and Tammi’s still-hanging-around ex-boyfriend, a Spanish-speaking detective, who you’d think might be very useful but is oddly left behind when Tammi goes to Quito to argue her mom’s case. In English. Tammi’s brother Robbie is no help at all, dealing with the stress of it all by resuming his drug habit.

Sandra gets progressively sicker (she suffers from scleroderma), but attempts to have her hospitalised fail, and – perhaps in acknowledgement of the futility of tackling the Ecuadorian legal system – there is no obvious effort to have her brought to trial. She gets to visit Nick regularly at the men’s prison (filmed at an actual prison in Bogota, Colombia), and is initially inclined to believe in his innocence, too – but revises her view after she finds that he has bought himself some more luxurious conditions with the money that Tammi sent him to arrange a destined-to-fail escape bid.

Films like this one, irrespective of whether the imprisoned person is guilty or innocent – take Midnight Express (1978), Live by the Fist (1992) and In Hell (2003) as examples – all struggle with how to convey the horror of being incarcerated in another country or in a brutal prison system without chauvinistically vilifying the whole country and all of its peoples. Left to Die deals with this problem by making an American, Nick, no better than his captors, and painting an extremely unsympathetic portrait of a US embassy official.

Still, I, for one, would be happy not to see another first-world-citizen-held-in-a third-world-prison movie for some time. 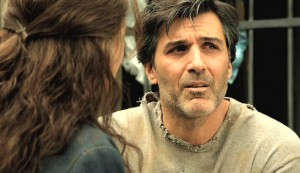 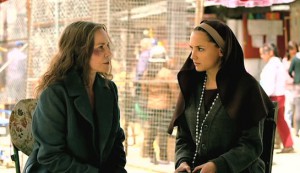