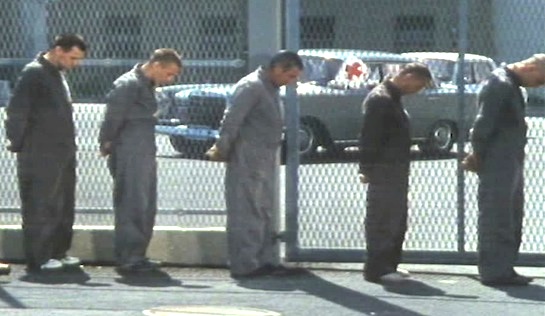 It’s Uruguay, 1980. In Montevideo’s Libertad (‘Freedom’) Prison (named with no hint of irony, it seems), communist-red clothing is banned on visitors and children’s pictures of birds are not allowed, either. Birds, it would appear, symbolise flight and choice and freedom, and the military regime is not well disposed to such thinking.

Libertad is a military prison full of political prisoners: Tupamaro leaders, union organisers, teachers, academics and other opponents of the right-wing regime. The prison (filmed, it appears, at France’s La Maison d’Arrêt de Lorient-Ploemeur, and one suspects a much cleaner, more humane institution that the real Libertad) has a deserved reputation for human rights abuses, including torture, and accordingly its inmates and their families eagerly await an inspection by a Swiss delegation from the International Committee of the Red Cross.

But soon after its arrival, the Red Cross delegation finds itself in a bind. It has only just managed to gain entry to the prison after six long years of negotiation, and the leader of the team, Claude Dubath (Bernard Waver) is aware that if the inspectors are too overtly critical of the prison, they will never be allowed back and the human rights abuses will continue unabated. The team’s concerns escalate when it learns that the supposedly confidential meetings that it is having with individual prisoners are being monitored and recorded. Dubath’s younger medical colleague, Dr Rudof Hoegen (Jean-Claude Leguay) is outraged and champs at the bit to expose and denounce the goings-on at the prison, but he is over-ruled. Regrettably, by taking the longer-term view the Red Cross looks at best ineffectual, and at worst in collusion with the corrupt authorities.

The film’s spotlight is shared by a succession of abject, uniformly-shorn, grey-uniformed prisoners, and their chief tormentor, the unctuous Dr Norberto Palacios (Roland Amstutz). The Palacios character would seem to have been modelled on Dolcey Britos, described as the architect and mastermind of the regime’s systematic dismantling of its prison inhabitants, both mentally and physically. Armed with all manner of intelligence – including tape recordings of the prisoners’ visits with their loved ones – he pushes each man towards their breaking point. Few remain unscathed.

One of the more staunch prisoners is Enrique Materneo (Phillipe Clévenot), a leatherworker and trade union official who has spent eight years in prison. To exert greater pressure on him, his bank accounts are audited, and his wife demoted from a professional role to a cleaner. Palacios then baits him by suggesting that his wife is having an affair with his nephew, and threatens that harm could befall his daughter, Susana, if he continues to provide information to a revolutionary newspaper. It is Susana who, on being told that she cannot include birds in the paintings she gives her father, subversively paints just the eyes of the birds – her own revolutionary statement.

The threat to her life is not one that can be taken lightly. Prisoners routinely disappear when they become inconvenient: one is pushed down some stairs, another ‘commits suicide’ immediately after hand-sketched drawings of the prison are found in his possession. Many of the prisoners’ families have fled to other countries, fearful of further reprisals; those who stay continue to suffer. The mother of the prisoner executed on the stairwell is told after his death that she is unable to visit him because he is ‘being punished’. After the Red Cross delegates leave, more bodies are carted away under the cover of night.

It is a grim, grim picture of a brutal regime; anything of value to the prisoners is simply waiting to be crushed before their eyes. The portrait painted of the Red Cross is barely more sympathetic; it is portrayed as pompous, inconsequential, out-of-touch and impotent. The team’s arrival and departure in a big swanky Mercedes speaks volumes, and is in such sharp contrast to the prisoners’ brave and loyal family members arriving at the prison on foot. It’s scathing commentary that the Red Cross would seem to have since tried hard to refute or discredit.

The prison itself is clean and orderly, with all the bugging devices and cosy stairwells that an authoritarian regime could wish for, and with the most unlawful acts and excesses ordered or sanctioned by those in positions of power. In the event that it wasn’t already patently clear: cleanliness and orderliness in a prison aren’t everything.

One Response to “Les Yeux des Oiseaux / The Eyes of the Birds (1983, Switzerland / France)”