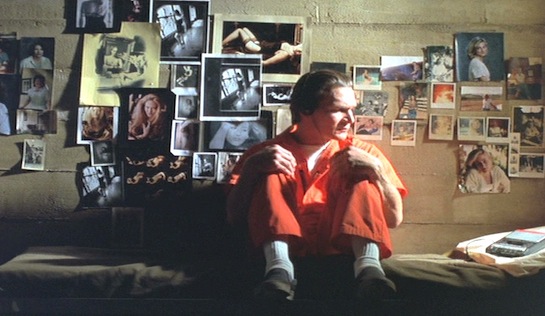 The blurb on the back of my DVD reads, “When a man is falsely convicted of the murder of his wife’s lover and ends up on death row, he develops intense relationships with three women.” It’s not a great movie, admittedly, and there is some detail in the plot to which you have to pay attention, but you’d hope that enough of the movie’s publicists would have stayed awake long enough to know that he was accused of killing his wife and then strung along four women romantically. His wife. Four women.

Race Darnell (Patrick Swayze) is the accused wife-killer. He’s been on Death Row for seven years, but has been keeping himself nicely occupied. He has written a best-selling book about his Death Row experience, and keeps up intimate correspondence with those four women, all of whom, presumably, initiated the contact on reading his book. When I say ‘correspondence’, I don’t mean written letters. That would be too simple. This is spoken messages of love put on audio cassette tapes. Perhaps the title ‘Cassette Tapes from a Killer’ didn’t have the same pulling power. Anyway, none of the women know that they’re not the only correspondent.

It’s an interesting phenomenon, women who strike up relationships with men who have committed heinous crimes. We don’t see much examination of it here, bar Darnell hinting that women enjoy a relationship with a man in prison because it’s “safe”. Pity. What we get instead is a pretty run-of-the-mill thriller.

And it’s an interesting prison, this Utah State Penitentiary, in which Darnell is being held. Staffing is an issue. One guard, Horton, is on such good terms with Darnell that he lends him his own books and the prisoner knows him well enough to chide him for not asking a particular woman out. There are six staff in the control room at one point – none watching the security camera footage, but four watching basketball (perhaps that’s not so incredible) and two listening to audio cassette tapes sent by and to the prisoners. Now, I don’t know anything about prisons in Utah, but to have two staff resources tied up listening to these tapes seems extravagant. Why not make everyone write letters, like the rest of the world?

Anyhow, this task is a top priority because another guard, Parker (whom we know is nasty because he blows Darnell a nasty kiss and later whacks a prisoner on the head with a baton when the prisoner is pleading not to be taken off to his execution), has to stay back after his shift and miss the game he wanted to go to, just to scrutinise these tapes. He’s not happy.. and when it’s suggested that he cause trouble for Darnell by putting the wrong tapes in the wrong envelopes, he does so gleefully. Soon afterwards, one tape comes back threatening Darnell with all sorts of horrible things. But who sent it? Steph? Gloria? Lita? Judith? Darnell is on intimate terms with each of them and has their voices all on tape, but strangely can’t distinguish one voice from the others.

While he’s in jail it’s not so much a problem.. but then he gets a retrial (the DA was found to have suppressed some crucial alibi evidence!) and is acquitted. He starts going to each of the four to see how his stocks are with them, and they start getting bumped off, one by one. Even his beautiful lawyer gets knocked, even though he’d never been intimate with her (that would have made five), straight after he’d been to see her, too, and left his fingerprints at the scene. And all of them have their ring fingers chopped off, just like his wife had done.

It degenerates once he’s left prison (which is very early in the film). Darnell is improbably joined on the run by Horton, and there are several car chases and even a horseback chase, the Police shoot at him from close range and incomprehensibly miss, he and one of the women who was pursuing him jump off a bridge to elude capture (that hasn’t been done before, has it?), and there are twists and turns and red herrings at every one of those turns.

Maybe that’s why the publicists were confused. 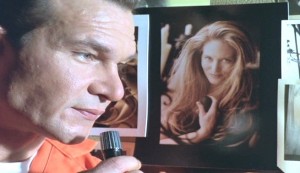 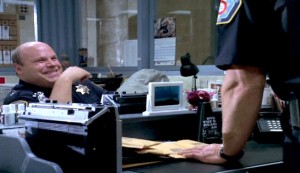