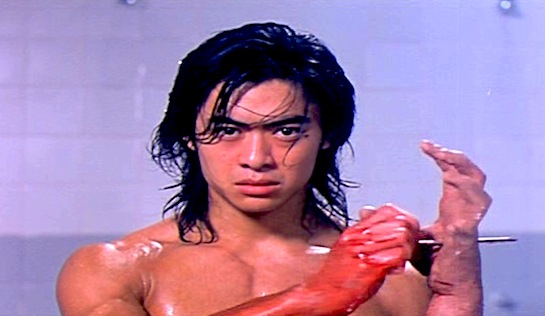 I’m not sure whether my favourite bit is when a bullied older prisoner commits suicide after being unfairly denied probation (that’s not the good bit), and the authorities handcuff his corpse as it’s being carried out on a stretcher (the handcuffs sending our hero into a vengeful fury). Or when one of the ‘Gang of Four’ prisoners who run each of the prison wings commits hara-kiri during a one-on-one bout with Ricky, and then tries to strangle his opponent with his intestines. It’s bloody, it’s not high-brow, it doesn’t take itself at all seriously, and it’s mostly good fun.

It’s 2001; ten years into the future. Prisons have all been privatised. Riki-Oh (Siu-Wong Fan) arrives at this big, modern prison, serving 10 years for manslaughter and assault. It turns out Ricky killed a triad member who was chasing his saccharine-sweet girlfriend after she stumbled upon some drug activity late one night; she fell (or jumped) off a rooftop and died. It also turns out that he has had superhuman strength and pain tolerance since he was a boy. Oh, and he can fight.

Ricky quickly finds out that the prison is horribly corrupt. When he arrives it’s being run by an evil Assistant Warden who has a double hook replacing a missing left hand, with a ceramic eye (that he keeps in a glass) to boot. He’s assisted by these four violent, ruthless prisoners who keep control of their respective wings; each is a kung fu expert, and each is called upon to fight Ricky as he challenges the authority of those who hold power. Later the even more evil prison warden returns, accompanied everywhere by his snivelling, corpulent young son. The warden’s finest moment is arguably pushing the arm of a prisoner (who was complaining, barely audibly, about the food) into a meat mincer and offering him the resultant bloodied product.

The plot is simple. Ricky repeatedly encounters some cruelty, injustice or criminal activity (a poppy crop, for example, which he burns down), whereupon he defends the weak or tries to avenge the wrong, and gets placed in as many horrific, cartoonish situations as they can dream up. He’s buried alive, covered in concrete, trapped in a cage with a metal ceiling descending to crush him, covered in chains and trapped inside a cluster of metal spikes where his mouth is filled with razor blades and his face hit repeatedly with a big spanner. For such a formidable fighter he is an awfully slow starter; invariably he is battered within an inch of his life before dragging out a final special effort. If you were his trainer, you’d make him work on this part of his game. Meanwhile, prisoners’ heads are exploded, their faces planed off, various limbs are chopped right off and – Ricky’s own speciality – punches are delivered with such force that they go entirely through the victim’s body.

You’ll be surprised to learn that Ricky overcomes all of these trials, and emerges a hero to all the downtrodden prisoners. Yay!

Don’t watch it if you’re looking for sensible entertainment. Or if you get squeamish at a bit of gore. 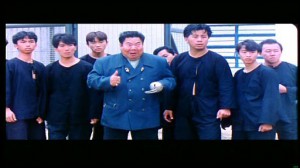