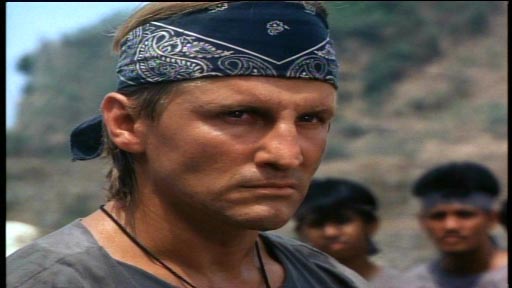 Given the choice of five nights in the box in this unpleasant island prison or being forced to watch this piece of feculence, you might just choose the former.

For starters, why film-makers think kick-boxers have something to offer as actors is beyond me. Then, having cast yet another wooden kick-boxer in the lead role, why you would fill the film with fight scenes in which he inflicts barely a scratch on the 2,614 bad guys he single-handedly defeats, is even more bewildering.

Jerry Trimble is the world-champion kick-boxer in question. He plays John Merill, and ex-Navy SEAL who is drawn to the distressed cries of a woman as he walks past a docklands warehouse. He jumps in and defends her against four Asian guys who seem  intent on raping and killing her. After lots of kicking and boxing, one of the bad guys winds up dead (having managed to roll on his own knife), as does the woman. Whacked over the head, Merill comes to with a knife in his hand, the Police hovering, and the remaining bad guys in nice accusatory poses. He is sent to the Bolera Prison Colony on an island which curiously appears to be under Portuguese rule, somewhere in the vicinity of the South China Sea. Or Goa, maybe.

Merill’s cellmate is Uncle Coronado (George Takei), a wise old prisoner who preaches tolerance and solidarity, and who smuggles letters off the island through a sympathetic prison doctor. Uncle has evidence of the Warden (Vic Diaz) skimming off the prison funds and covering up lots of deaths (many, it seems, the result of gunshot wounds and torture). The recipient of the letters, a beautiful human rights worker, Helen (Laura Albert), flies into the prison, threatens to get to the bottom of the allegations, and promptly disappears. As you do.

Meanwhile, Merill is kept busy kicking and boxing. He fights prisoners in his underpants, he fights them in shower-blocks, in quarries, in cornfields, in garages. His preference is to fight around four at a time, unarmed while his attackers carry picks or burning stakes or knives. His bad luck continues: (i) while he is always the victim he invariably gets the blame, and (ii) terrible sound effects accompany his every kick and punch. Kapow!

Warden Acosta ultimately discovers that it is Uncle who is the problematic letter-writer and arranges for him to be killed by a cynical alliance of the heads of the racist white group and the racist Asian group. This is deliciously timed to coincide with Helen’s return to the island with a human rights team. With his last breath, Uncle exposes the Warden’s wrongdoing, handing over the proof to Helen and her team. Working on the basis that attack is the best form of defence, the Warden has most of the human rights team shot – which might, just might, make things difficult for him when these people fail to return to Vietnam, or Portugal, or The Hague.

But his men fail to shoot them all. Amidst a flurry of gunfire that is sufficient to blow up Helen’s helicopter but not two people running a few metres ahead of them, Merill and Helen escape in the Warden’s powerboat. Romance beckons.

It’s awful. There are very few redeeming features and none of the actors can rise above the ludicrous plot. And, sadly, it takes itself just seriously enough to prevent the viewer from laughing along with it.