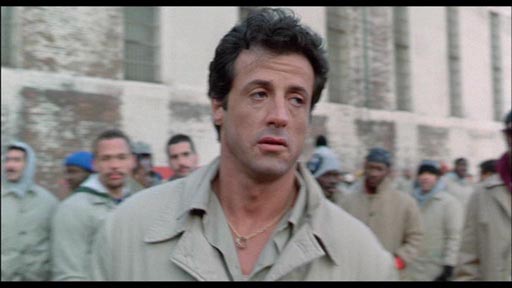 When even some of the Stallone-friendly sites suggest that this isn’t one of Sylvester Stallone’s best movies, you are entitled to approach it with trepidation.  But it’s no worse than many other prison action flicks.

Stallone plays Frank Leone, a prisoner who, at the start of the film is approaching parole at a low security prison.  In jail for a ‘justified’ vigilante attack on some hoods, you can tell he’s low risk because he comes back from a leave with his pretty blonde girlfriend, there’s a Klee poster on his cell wall, all his fellow prisoners are happy and laughing and Frank is on best buddy terms with the staff.  From this harmonious, rehabilitation-focussed existence he’s taken by thuggish guards and literally thrown into a high security prison run by a brutal, vengeful warden whose career was once ruined by Frank – who had escaped from the warden’s last jail after being denied a visit to his dying father (from which the warden got lots of bad press for being brutal and vengeful). You can do that, apparently, in the States; kidnap prisoners who have caused you grief in the past, bring them to your jail so you can give them a hard time, and no-one minds.

The warden (played menacingly by Donald Sutherland) uses all the means at his disposal (sadistic guards, sleep deprivation, other inmates, sadistic guards pretending to be soon-to-be-released prisoners intent on raping his girlfriend, stopping her letters from getting through – you get the picture) to get Frank to crack and escape or kill someone and get more jail time.  Despite this apparently hellish regime, there are interludes when Frank and half a dozen of his mates are left unsupervised in a workshop to smoke cigars, drink home brew, and fix up an old Mustang with angle grinders, flammable liquids, full sets of tools etc. Hmmm.

Stallone gets plenty of opportunities to show off his biceps and his abs and all the bad guys of course get their come-uppance and everything turns out fine. 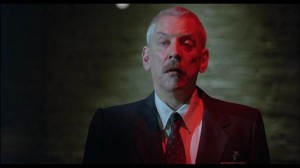 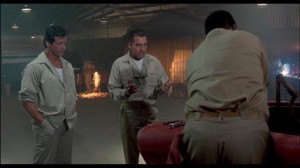