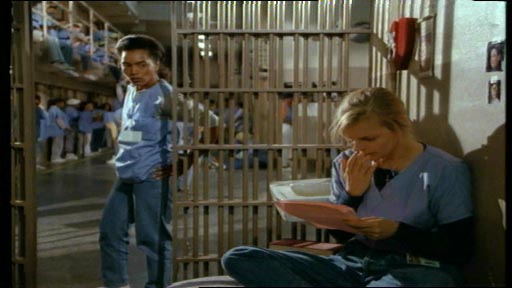 Also known as ‘The Other Side of Love‘, this starts like so many uninspired B-grade films about innocent men or women in prison, but it rallies to say a few fresh things about the toll that imprisonment takes on prisoners’ families left on the outside.

Hard-working divorcée Annie Gallagher (Cheryl Ladd) is courted by a handsome young man who asks her to mind an envelope with a huge amount of cash in it – ostensibly because he can’t get to the bank and doesn’t trust his housemate. She says yes. The Police swoop and find drugs and the cash. The rotter then gives evidence against her, claiming that she was trafficking the drugs and he was buying. It beggars belief that she would be convicted on his evidence alone (too pretty, too white-bread), or that the Police or the DA would buy his story, but there would arguably be no movie without this bit of nonsense. Anyway, she rejects a plea bargain that would have given her a 1 to 3, and gets 15 to Life instead.

We get the standard new chum in jail bit: the ‘I don’t belong here!’ stuff and the inevitable clashes with the tougher prisoners – notably Willie (Angela Bassett). What’s different, though, is the time the film takes to dwell on the turmoil that her imprisonment creates – the imposition on her sister Cathy (Jean Smart) and her husband Mike, who suddenly have to take in Annie’s three kids, and on the kids themselves. The instant family places too much pressure on Cathy and Mike’s relationship, and they split. The family is forced to move to a smaller house, the cost of driving to the prison for visits becomes too much, Cathy struggles to cope, and the kids start to disintegrate: the eldest, Kelly, overdoses on pills but survives, Shawn can’t deal with his anger at his mother getting into trouble and starts to develop some worrying behaviours… and the youngest starts calling Cathy ‘Mom’. Annie, meanwhile, is fixated on her problems and takes Cathy’s huge sacrifices for granted. It’s grim.

In time Annie resurrects herself with the help of a selfless Quaker volunteer, Frances (Diana Maldaur), and a self-educated African American prisoner, Sherisse (Kimberly Scott), who advises her about the futility of a second appeal and encourages her to put in a petition for clemency instead. Annie starts to fight for herself and others, too; she predictably wins the trust of everyone (including the troubled Willie), works with Frances to do great things for other mothers and their children, and gets some time to be a real mother to her kids.

The basic premise is not a novel one, but the focus on the parallel struggles to survive both inside and out makes this one stand a little apart. 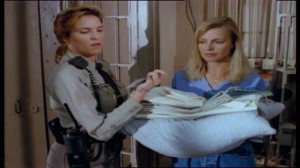 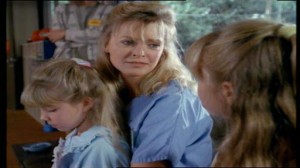