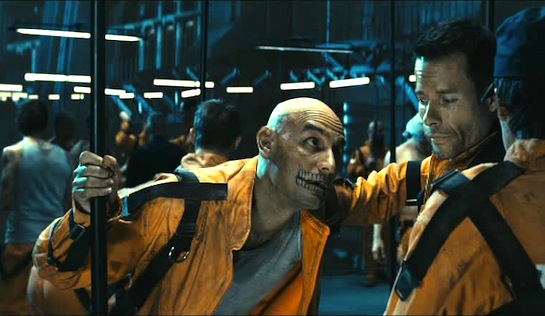 I know I’ve said that I’m not interested in sci-fi prison movies… yet here is another one. My excuse? I was on holidays and it came up on my TV. I didn’t seek it out; it came to me. And when it did, it came as a kind of updated remake of Escape from New York (1981), which I hadn’t been expecting.

One of the reasons I’m not generally interested in sci-fi stuff is that I get so easily distracted by the rate at which different elements of our world change. Much transportation in 2079 (when this movie is set) is, for example, markedly different to that of today, as is food and some weaponry… but other things, like hotel rooms and hairstyles and sexual politics have remarkably not changed one iota. Curious, no?

But enough of that. We’re interested in special agent Marian Snow (Guy Pearce), falsely accused of a treasonous murder, convicted without a trial and ordered to serve his 30-year sentence at an ultra-high-supermax prison in outer space, MS One.

MS One is a new prison concept that sees all its prisoners kept in stasis – frozen, essentially – for the duration of their sentences. Yes, there are some minor side-effects, such as early-onset senility and psychosis, but on the plus side it generally proves effective at controlling troublesome behaviour. The US hopes to expand its 500-bed pilot program, marketing it commercially to the rest of the world and aiming for half a million prisoners in suspended incarceration. Emilie Warnock (Maggie Grace), the daughter of the US President, has booked a trip to MS One to inspect the scheme first hand and satisfy herself that prisoners’ human rights are not being unreasonably infringed.

While she is there, one of the prisoners, Hydell (Joseph Gilgun), is brought out of his comatose state to answer her polite questions. Hydell is, however, not polite. He steals Emilie’s bodyguard’s gun (smuggled in against orders) and manages to shoot the guards and release all of the other prisoners, all of whom are instantly brought out of their comas. They take Emilie and several others (those whom they don’t summarily execute) hostage. Hydell, a splendidly volatile Scot, and his much more sensible and strategic brother Alex (Vincent Regan), who immediately assumes leadership of the siege, pretty much become the only two prisoners about whom we are expected to be interested – other than an old associate of Snow’s who may hold the key to Snow being able to clear himself of his murder charge.

It’s a tricky situation. Were it not for his daughter being amongst the hostages, everyone assumes that the President would simply order the whole prison to be blown up, killing all the rioters and the surviving hostages, whose numbers are dwindling rapidly anyhow. Back on Earth, the same Secret Service agents who put Snow away concede that he is the only person capable of rescuing Emilie, and he is duly sent to MS One, not merely as as a prisoner, but as a prisoner on a rescue mission.

And from that point the film becomes a fairly predictable action movie (notwithstanding an unexpected twist at the finish); Snow and Emilie teaming up, lots of narrow escapes, lots of tension, and lots of sexual tension. Lots.

Pearce, at least, does a nice line in sardonicism and the two Scottish brothers are superb prisoner stereotypes –  Gilgun, in particular, is magnificent as the crazy, one-eyed, unpredictable time-bomb Hydell, bent on both revenge and instant gratification (traditional crazed maniac traits that one is pleased to see survive to the latter part of the 21st Century, just like the human rights discourse).

I have made no secret of the fact that I don’t like action films, but this one, I confess, is entertaining. 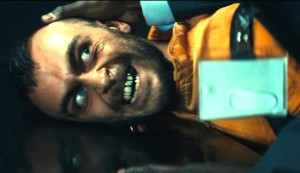 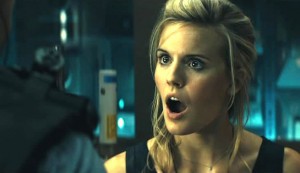