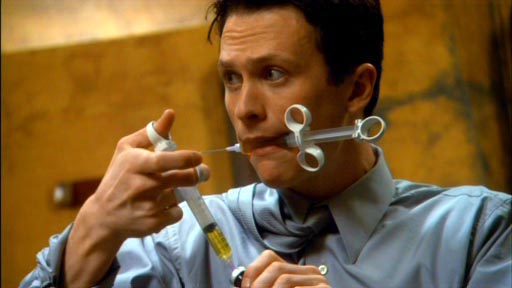 The final credits contain the normal disclaimer about the events depicted being fictitious and not representing any actual persons, living or dead. Really, in a story about a young man who takes on the job of executioner at the jail in which his brother is on Death Row, and who falls in love with (and then impregnates) his brother’s ex-girlfriend who is also on Death Row, it’s a bit unnecessary. One would hope.

Heck Prigusivac (Jonathan Tucker) has just graduated in classical languages, and nerdy enough to wear his mortar board and gown back to his hometown in triumph. He’s there to tell his alcoholic, ex-porn star mother that he’s pursuing a career teaching Latin in Seattle, but soon realises that his mother will drink herself to death if he doesn’t hang around.

No-one in New Pristina wants to employ him, principally because the Prigusavics don’t have the best reputation in town: Heck was conceived while his killer father was in prison, awaiting execution, and his brother Chick (Jeremy Renner) is also on Death Row after annihilating Heck’s entire Latin camp. Heck, it seems, borrowed Chick’s car without permission and Chick ‘over-reacted.’

As hope fades, Heck is drawn to the prison, hoping that he might pick up a job teaching Latin. The warden strikes a deal; he can teach Latin, provided that he also takes on the role of  ‘Closer’ (executioner) – for which he has impeccable bloodlines. He agrees. There’s a bit of unresolved tension with his brother (something to do with giving evidence against him), made worse by Heck pursuing Dori (Ginnifer Goodwin), Chick’s ex and the only girl on Death Row, who shot her husband in self-defence 37 times over a three-day holiday weekend.

This is not so much a black comedy, as light grey. There’s a light-heartedness to the treatment of executions (“Heck, be careful,” says the doctor as the new Closer fills a syringe in readiness for the lethal injection, “You might get air bubbles – that could be fatal”. Or Dori, awaiting execution and refusing to consider an abortion for her unborn child: “I’ve always been very pro-life”. Or Chick complaining that Heck’s enthusiasm to be the one who puts him to death might be “taking sibling rivalry just a little bit too far.” Or one inmate flailing around the execution room after being under-dosed – and then mortally impaling himself on the priest’s crucifix. That sort of thing). And a similar lightness around mass murder, cirrhosis, and mothers sitting down with their sons watching the old porn movies in which they starred.

I found it a wee bit hard to get into that executioner-Death Row inmate love affair thing and some late mawkishness, but the Latin classes and prisoners tossing Latin phrases and classical references into normal speech are a delight. It’s the comedic equivalent of the absurd action flick, but easier to take. 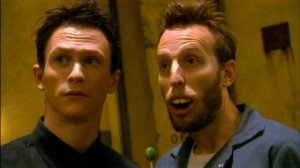 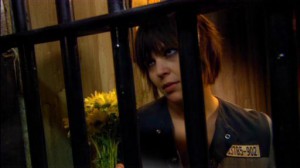