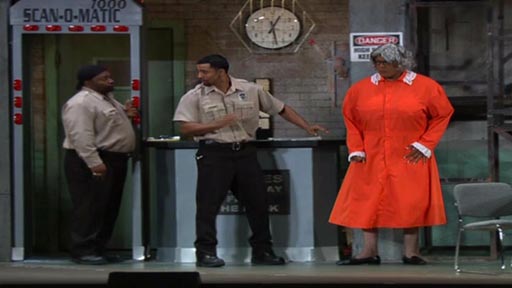 This is about as far as you can get from being a prison movie for a film that has the words ‘goes to jail’ in the title. Not to be confused with the 2009 flick of the same name but with a completely different plot, this is a film of a Tyler Perry play. Perry is the writer, producer, director, and creator of the character, which he plays in drag. He is a tall man and Madea, an elderly, bosomy, gun-totin’, chain-smokin’ matriarch is a formidable presence.

More Big Momma than Mrs Doubtfire, she can be crotchety but has a heart-of-gold and firmly espouses very traditional values – to the delight of her conservative, God-fearing audience. Part of the play is set inside a jail, where Madea is briefly held for a petrol station drive off and speeding. But most of the action takes place inside her home, which she shares with her prison guard nephew and his wife… and the 16-year-old daughter of a woman she met in jail, whom she agrees to look after and protect. And discipline. The play unashamedly promotes a Christian message, while intriguingly at its very centre is a woman who would rather be at the casino than in church. Perry lets the others do the proselytising, while giving himself the bigger laughs by beating up the toughest prisoner in the jail and laying down the law to pimps, cheating wives and teenagers. He knows his audience. There’s plenty of raucous applause as he proffers homespun advice on self-esteem, relationships, parenting and the responsibility of children to do as they’re told. Unfortunately, the actors have a disconcerting habit of breaking into song, and the enthusiasm which greets Madea taking a belt to the 16-year-old girl is also rather unsettling.

The film also goes through a number of self-indulgent patches and is half an hour too long. But there are plenty of funny moments to sustain it and if it takes a 6’ 4” bloke in drag to make some respectable messages more palatable, then so be it. 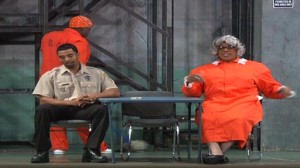