Man of Will retells the real-life story of nationalist hero Kim Chang-Soo, who much later, as Kim Koo, became the sixth and last Premier of the Provisional Government of the Republic of Korea. But the film doesn’t bother with any of the irrelevant stuff, concentrating instead on what was really important: the two years he spent in jail.

As a 19-year-old in 1896 Chang-Soo (played here by the 40ish Cho Jin-Woong) killed a Japanese man, believing him (on the somewhat flimsy evidence of the man being disguised as a Korean and carrying a sword) to have been a part of the assassination, four months earlier, of Empress Myeongseong. Rather than flee, which would have been an admission of guilt, he waits to be arrested and is taken to the Incheon Prison, where he protests that it was his patriotic duty to avenge the Japanese killing of the Joseon queen.

He doesn’t have it easy in prison. The young, smartly-dressed, ambitious, brutal (and pro-Japanese) warden, Kang Hyung-Sik (Song Seung-Heon), has him beaten and left out in the rain, and the other prisoners initially treat him as a fanatic and a fool. At trial, he is quickly sentenced to death.

Amongst those willing to put him in his place is tough guy Ma Sang-Gu (Jeong Man-Sik). They fight (with Sang-Gu easily coming out on top), but later call a truce and Chang-Soo discovers that Sang-Gu is held in prison unjustly; he had pulled a wealthy landlord off a farm girl and later, when the girl was killed, was framed as her killer.

Almost everyone in the prison – prisoners and guards alike – is illiterate. Chang-Soo is not. He writes a detailed petition on behalf of Sang-Gu, appealing against his conviction, but a spineless guard Lee Young-Dal (Yoo Seung-Mok) hides it away in a cupboard and doesn’t send it off. With his reputation as a skilled writer spreading quickly, a chief guard has him write a petition to recover his family’s land, held as a surety and then lost to Japanese interests; for writing the petition Chang-Soo wins a special feast for his colleagues to celebrate another prisoner’s 60th birthday (a little Shawshankish, you might think), and when it is successful he asks for and is granted a bigger reward – approval to teach the prisoners (and some of the guards) to read and write.

But when the newspapers learn that the prison has been ‘turned into a school’, the warden is furious. He has been working with the Japanese to supply men to build a railway, and he doesn’t want educated men. He has Chang-Soo beaten again and confined to a subterranean cell with no shelter from the elements. It is snowing. The railroad construction goes ahead, with the warden’s ‘freeloading’ prisoners providing all the labour. “Only those who can will make a difference,” says Kang Hyung-Sik smugly, leaning over the grate above Kim Chang-Soo’s cell.

Chang-Soo is ultimately released from his cell and is put to work on the railway. Two prisoners are shot and killed (by the craven Lee Young-Dal) while attempting to escape, with one who has been wounded being shot in cold blood while pleading for his life. Later, when a steel girder crashes through wooden scaffolding, trapping several men below, Sang-Gu (observing as he goes that Chang-Soo has taught him to understand that all are human) goes back to rescue Young-Dal despite more of the edifice ominously on the brink of collapse. It does collapse; Sang-Gu is killed and the guard he saves, who earlier had failed to post his appeal papers, gets out alive.

When time for his execution arrives, Chang-Soo is emotionally farewelled as a hero by all the prisoners. But with the noose looped around his neck and Young-Dal now struggling to pull the lever, a judge brings news that the king has granted him a reprieve – having read the many petitions written by newly literate prisoners and smuggled out of the prison by the remorseful Young-Dal. Hooray!

Chang-Soo celebrates by escaping with his cellmates that same night… not to be seen again for years and after which he re-emerged as a political figure. Wow. True story.

It is a stirring tale, even if none of the Japanese have any redeeming features and the characters are a bit two-dimensional. The contrast between the greed and treachery of the warden, selling his soul to the Japanese for personal gain, and the altruistic, patriotic Chang-Soo is necessarily pointed but also a little too unsubtle. It is no surprise that the warden finally gets his comeuppance, courtesy again of Young-Dal’s new redemptive spirit, and in a manner again very reminiscent of Warden Norton’s downfall in Shawshank.

Is it a reliable depiction of life in a late 19th Century Korean prison? I have no idea. Many of the prisoners are held unjustly. Many of the characters seem more modern inventions (including the 16-year-old Kim Chun-Dong who is passed the baton to keep the school going, and the stupid Cho Deok-Pal, whose insensitivity – such as urging his cellmates, including Chang-Soo who is on death row, to ‘get over’ the execution of another good, wise man, Ko Jin-Sa, noting that all people on death row have to die – is routinely played for laughs. Or wry smiles). But these characters might conceivably belong to any era.

Not so the young, urbane, upwardly mobile warden, one suspects. My guess is that youthful wardens didn’t exist in 1896, no matter how supportive they were of the Japanese. Whether they would freely assault their staff for incompetence, as Kang Hyung-Sik does, is also moot. And whether the poor masses in jail would refrain from rising up against him is debatable as well.

An inspiring piece that might nonetheless struggle to withstand too much scrutiny. 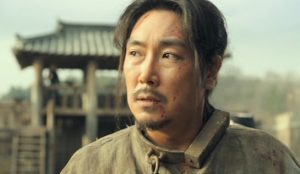 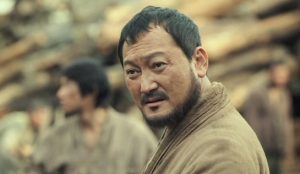 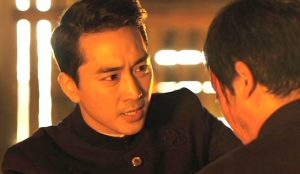 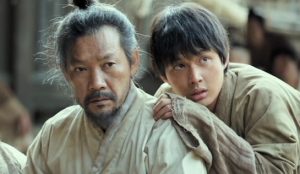 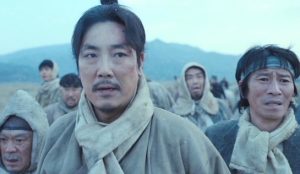 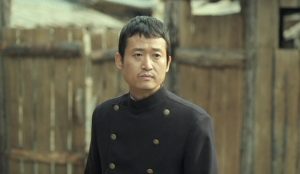