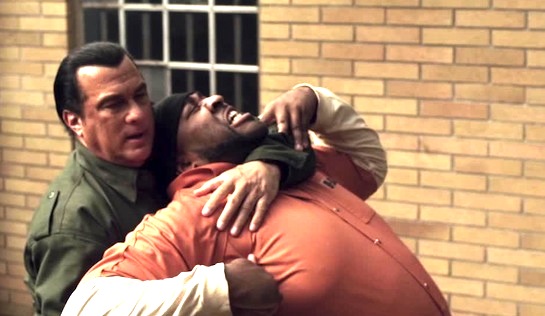 Ex-Marine Cross (Steven Seagal) and his buddy Manning (Steve Austin) are private security contractors brought in to decommission a ‘top secret military dark facility’, all of the military’s own dark facility decommissioners being otherwise engaged. Cross and Manning are old Black Ops mates, but that was a long time ago; Seagal is so bloated here he is more black pudding than Black Ops.

The two men think they’ve finished their job, but Warden Samuels (Ian Robison) is having none of it; they signed in two high security female prisoners the night before, and now they must sign them out. Bother. And then rogue ex-Special Forces man Blake (Michael Paré) spoils things further by turning up with a small army of mercenaries to retrieve something from one of the women, Samantha (Steph Song); it seems that her lodgement in the prison may not have been as top secret as supposed.

Can Cross and Manning repel the nasty armed insurgents? On the down side, they are horribly outnumbered and out weaponed; Blake and his men have control of the prison, are ruthless, have captured the Warden and have opened all the cell doors so that the remaining prisoners are on the loose. On the up side, Cross appears that he might be wrapped in so many layers of kevlar as to be impregnable, the female prisoners are too attractive to get killed, and Cross’s arms extend just enough beyond his girth to allow him to defeat any opponent in hand-to-hand combat.

It’s also very lucky that all the undercover operatives are willing to disclose the details of their clandestine activities to people they have just met – otherwise we might not be able to decide whose side we’re on.

This may not be action movie-making at its most inane, but it must be close. 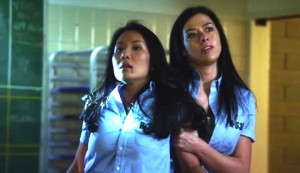 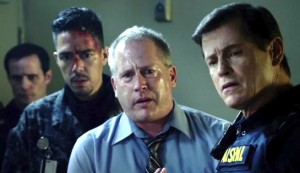