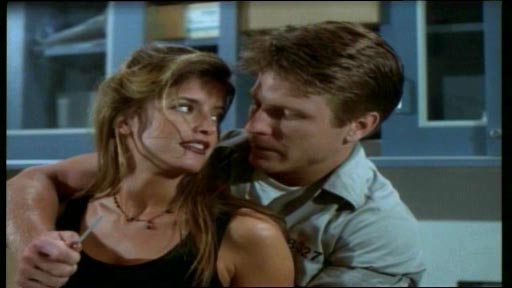 Also known as ‘Maximum Revenge‘. Now, I’m not fond of action movies, as you may have noticed, but it’s hard to imagine that an action movie could get any worse than this. The best that can be said for it is that it is so awful and so absurd that it is mildly amusing.

The blurb on my DVD is not hugely useful. It starts: “Innsmouth Prison has become obsolete. The prisoners have been relocated. All that remains in the empty penitentiary are the Warden, four guards and six Death Row inmates.” Well, no. It’s a brand new prison, about to open, and five prisoners, not one of whom is on Death Row, are brought in… goodness knows why, because there appears to be virtually no staff, and none of the services seem anywhere near ready to accept prisoners.

One of the inmates is Mace Richter, a former cop, who is doing time for two unlawful killings. He went in to negotiate with some supposed terrorists holding a planeload of people (including an Arab prince, who oddly seemed to be in the economy seats) hostage. The prince assures the hostage-takers that his oil-rich brother will pay the ransom, but a flight attendant gets too brave, shots are fired, Richter kills one of the baddies and then the prince points a gun at him, accusing him of ruining it all, so Richter shoots him, too. Not one of the other passengers heard or saw the prince do anything, so Richter becomes the fall guy and heads off to jail so as not to damage diplomatic relations with an important oil-producing trading partner.

The Warden takes the media on a tour of his new facility. Amongst the journalists are Tracy Quinn (Landon Hall) and her cameraman, and two bad guys, including one of the terrorists, Stefan, whom Richter shot in the face, leaving him with a scar which has damaged his positive self-image.  As the tour is about to end the mercenary group, led by the cold-blooded Murdock (John Lazar), who has escaped from prison with Stefan and who has already taken revenge on a journalist who had written nasty things about him, gain access to the undermanned prison and take over the Gate and control room.  They kill the guards and the cameraman. Their plan: plant a city-threatening nuclear bomb where no-one will be able to get to it, and blame it on the Arabs, forcing the US to take (pre-9/11) reprisal action. Oh, and catch up with the face-scarring Richter.

And there you have it: lots of armed bad guys, five unarmed prisoners (including one ex-cop who insists on rolling up his sleeves to show off his biceps), one Warden, one attractive woman, and one ticking bomb. Guess who wins.

I can’t decide which is my favourite bit. ‘Favourite’ is not the right word because it is so offensive, but high on the list is the sheer resilience of Tracy. She gets grabbed by one of the prisoners, kidnapper Jesus Gonzales, who has removed her underwear and is just about to rape her when Richter intervenes. Richter takes her to the clinic ostensibly to get an ice-pack for her bruised face, and tells Gonzales to mind the door. He sensitively shows Tracy how to slit someone’s throat, they naturally embrace (she still being in the mood after the rape attempt), and then – with armed bad guys running amok in the prison, a would-be rapist at the door, everyone’s lives at immediate risk, and minutes after she was saved from being raped – they get naked and make love. Tracy gets taken hostage twice more (again by Gonzales and once by the bad guys, all of whom signal their bad intentions towards her), but she is still able to engage in some sexual banter with Richter when it’s all over. Perhaps we could put this very odd behaviour down to post-traumatic stress. I’m not sure what Richter’s excuse could be.

And then there’s the bomb. When it’s set to go off, the timer shows 6000. “Sixty minutes and counting!” they say. Should that be 3600… or are we not counting down in seconds? I got confused. Then, with just 120 on the timer and Jackson (a prisoner with a bullet wound to his shoulder and a background in bomb-setting) frantically working to defuse it, we go through 2 minutes 15 seconds of screen time to sneak another anxious look at the timer… and it reads 88! You may not believe this, but they cut the right wire with just 1 left on the timer! Such tension!

As any sort of movie this one is a disaster. As a prison movie, it’s worse… from the Warden insisting that his prisoners be referred to as ‘guests’ rather than prisoners, to the other prisoners’ acceptance of ex-cop Richter, to the final scene where Police and ambulance officers swarm all over the prison (how they gained entry is a mystery given that there would appear to be no-one left other than one bad guy to open the gate), it’s a bad joke. 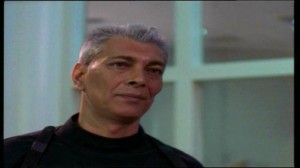 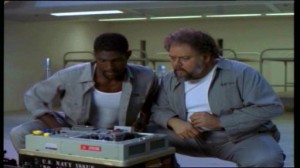 Filmed, in part, at the Twin Towers Jail, Los Angeles.