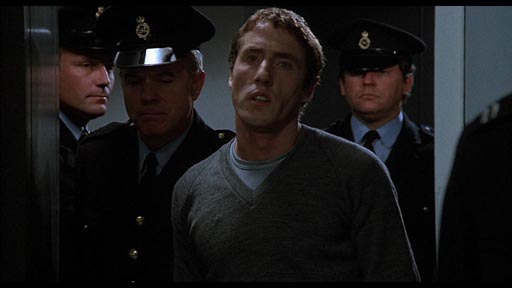 Based on the true story of John McVicar, played surprisingly well by Roger Daltrey from The Who.  McVicar, an armed robber who graduated from university while in prison and became a journalist upon his release, escaped from the high security E Wing at Durham Prison in 1968, and while other parts of the film are fictionalised, the escape is supposedly not.

Unlike many of the US-based prison movies, there’s something awfully recognisable about the setting for an Australian audience; a Pentridge-like Wing, full of British Prison Officers in peaked caps, and a level of violence proportionate to the need for it. There’s not one non-Anglo-Saxon prisoner in the wing, which also gives the prison a different feel to US films, and no doubt dates the film in the British system, too.

McVicar, portrayed as a ‘hard man taking on the system’, actually does very little in the film to deserve that tag – other than making a few threats towards staff and throwing things about. The escape itself relies on one’s credulity to remain intact; McVicar and his mate spend an inordinate amount of time in the shower block, into which anyone can enter at any time, and knock a whopping great hole in the wall. The officers don’t notice, don’t seem to question why they’re in there for such a long time (other than surmising there’s sexual activity taking place), and don’t seem to wonder why it would be necessary for them to take a bucket full of papier mâché and paint in there each time they’re showering.  Anyway, they tunnel out, McVicar gets away, heads back to London, and – rather than laying low – spends a lot of time undisguised driving round in a flashy blue E-type and playing with his girlfriend and child in a park. The Police extraordinarily never knock down his girlfriend’s door, and he is only caught when betrayed by an associate.

The main interest, other than how he gets out, is how unsympathetically McVicar (who co-wrote the screenplay) portrays himself, particularly in relation to his lack of empathy for his armed robbery victims, and how reasonably he portrays the system which tried to contain him. 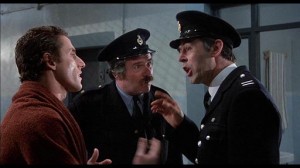 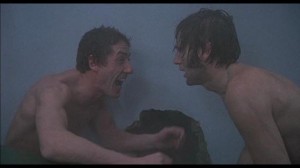